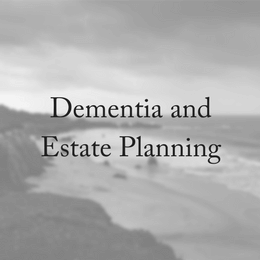 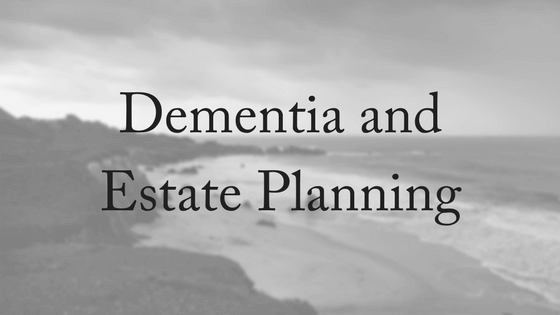 Why do dementia and estate planning go together? Because the presence of dementia in someone’s life many mean that they’ve lost the mental capacity to make legal decisions for themselves, and because it increases their risk of being financially exploited and abused. Being aware of what dementia looks and understanding what you might need to do can protect your loved one from abuse.

Dementia is a disease that is affecting more and more people because we are living longer, and in most circumstances is a disease of old age.  What is it and what does it mean for sufferers and their families when it comes to estate planning?

The woods decay, the woods decay and fall,
The vapours weep their burthen to the ground,
Man comes and tills the field and lies beneath,
And after many a summer dies the swan.

These are the first words in Lord Alfred Tennyson’s poem, Tithonus. It is a poem about a man who asks for and is granted immortality. It was this section of the poem that was included in a death notice for Sir Nicholas Wall, formerly Britain’s most senior family law judge. In the poem we learn that for the aging Tithonus, immortality has become his prison and he now longs for death.  The poem ends with him imploring the god who granted him immortality, Aurora – goddess of the dawn. He says to her:

Release me, and restore me to the ground;
Thou seëst all things, thou wilt see my grave:
Thou wilt renew thy beauty morn by morn;
I earth in earth forget these empty courts,
And thee returning on thy silver wheels.

Sir Nicholas Wall’s death was not an expected one. He committed suicide after being diagnosed with dementia.

Later, the family released a statement which said: “We are sad to confirm the death of Sir Nicholas Wall, who was not only a highly-respected former President of the Family Division but also a 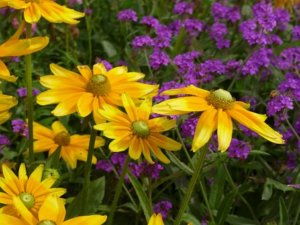 much-loved husband, father and grandfather. Sir Nicholas took his own life having suffered for several years from a rare neurological disease called fronto-temporal lobe dementia that had only recently been diagnosed.”

Fronto-temporal dementia, which is typically diagnosed in people aged between 45 and 65, is sometimes called Pick’s disease and affects the parts of the brain that control behaviour, emotions and language. Its effects include changes in personality and behaviour and difficulties with language.

Alheimer’s Australia says this about the types of dementia:

Dementia is the umbrella term for a number of neurological conditions, of which the major symptom includes a global decline in brain function.

It is a condition that has been noted in people for hundreds of years.

Dementia was a relatively rare occurrence before the 20th century as fewer people lived to old age in pre-industrial society. It was not until the mid 1970’s that dementia begun to be described as we know it today.

We now know dementia is a disease symptom, and not a normal part of aging.

There are over 100 diseases that may cause dementia. The most common causes include Alzheimer’s disease, vascular dementia and dementia with Lewy bodies.

[Tweet “In Australia, dementia is the second leading cause of death after coronary heart disease.”]

These can vary from person to person, but generally there is ongoing cognitive decline which becomes evident through a decrease in capacity for things such as:

There may also be some changes in personality or they may not be able to control themselves like they once could. Usually the disease occurs in those who are aged 65 or over.  Around 1 in 4 people aged 85 and over are living with dementia, of which Alzheimer’s is the most common form. 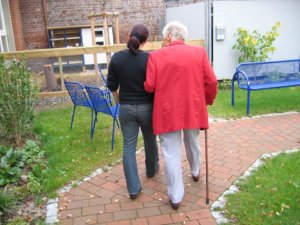 It is always wise to have your estate planning complete and up-to-date, especially if you’re ageing. Because of the nature of dementia, it is important to help a loved one who has been diagnosed to see an estate lawyer as soon as possible if they do not have a will or other estate planning in place.  This is essential for them being able to have a say about what happens to their possessions when they die.  It’s also important for them to nominate someone to make decisions on their behalf if they become unable to do so themselves. Good estate planning will also incorporate an advance health directive so that your loved one’s wishes for their end-of-life are made clearly and leave no room for family conflict. For them to make these decisions they need to be considered of sound mind – often referred to as ‘testamentary capacity’. So here is a list of some of the the essential documents to have in order:

Protecting Your Loved One With Dementia

Elder financial abuse is on the rise.  It is something that we are seeing more and more often.  At Estate Battles we believe in protecting our elderly from financial abuse. This group of people are more at risk than others because of their decreased cognitive ability.  Putting checks in place to make sure there is nothing suspicious happening with their living situation or their day to day use of money will help to ensure that they are protected from predators. The sad reality is that it is often family members who are the perpetrators of elder financial abuse.

An Accredited Specialist in Succession Law (wills and estates), Bryan Mitchell says that experts in this area of the law have the training and expertise to pick up on signs on cognitive decline. They can also detect signs of elder abuse from family members or others. Experts will take very detailed notes of their meetings with clients whom they suspect might be experiencing cognitive decline, because it’s often when that person has lost their mental capacity that an estate battle erupts. Those detailed notes, says Bryan, will help guide the court in making a fair decision and removing any presence of exploitation or abuse.

If you would like help with your estate planning for you or your loved one, or you suspect your elderly loved one is a victim of financial abuse, then please contact us today. We offer a free, 10-minute phone consultation.