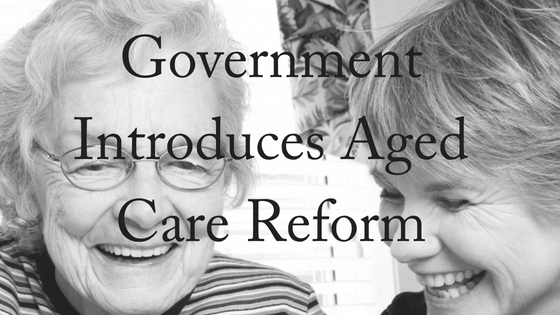 Australia’s aged care sector will soon have to answer to a single watchdog under Federal Government aged care reform in the wake of the Oakden elder abuse scandal in South Australia.

Aged Care Minister Ken Wyatt has announced plans to combine three separate agencies which handle quality control and complaints in the aged care sector by the beginning of 2019.

A new ratings system allowing facilities to be graded against key benchmarks, and a comparison tool on the My Aged Care website, will also be introduced.

“The unified new commission will be a responsive, one-stop shop to prevent failures, highlight quality concerns and have them quickly rectified,” Mr Wyatt said.

“When you bring three Commonwealth agencies [together], you streamline a process. You’re not waiting for one to write to the other or seek advice from the other.”

The consolidation of services was recommended by a review of national aged care regulation established in direct response to revelations about the Oakden aged care facility in Adelaide’s north-east.

South Australia’s chief psychiatrist found elderly dementia patients at the facility were abused and neglected by their carers over a decade.

The whistle was blown when the family of Oakden patient Bob Spriggs raised concerns about his treatment, including over-prescription of medication and unexplained bruises. That prompted other families to come forward with similar concerns.

A scathing report from the South Australian anti-corruption commissioner, Bruce Lander, later made damning maladministration findings against five individuals and the public authority overseeing the facility, which was closed last year.

The Council on the Ageing has described the latest aged care reform as a “significant step” towards “better monitoring and enforcement” of aged care compliance, and rebuilding trust in the system.

“It is appropriate the new commission explain in an easy to understand way how individual providers comply with the standards expected of them,” chief executive Ian Yates said.

A chief clinical advisor will advise the commission on complex clinical issues, and risk profiling of aged care workers will also be bolstered.

“What we’ve seen around this country is that … staff who have been trained in a very short timeframe, and who have not had hands-on experience, struggle,” Mr Wyatt said. “Some individuals are not suited. They’ve not realised what the job is.”

Aged care peak body, Aged and Community Services Australia (ACSA) has welcomed the reforms and says the organisation will work constructively with the Federal Government following the announcement of a single Aged Care Quality and Safety Commission as part of a focus on strengthening and supporting the provision of quality aged care for older Australians.

ACSA Chief Executive Officer (CEO) Pat Sparrow says the aged care industry is one with a strong commitment to quality care and continuous improvement, and welcomes the steps taken by the Government to strengthen aged care regulation and compliance for the benefit of older Australians and their families.

“The streamlining of the functions of the Australian Aged Care Quality Agency and the Aged Care Complaints Commissioner into a single agency should improve the regulatory system that all Australians, and aged care providers, rely on,” Ms Sparrow explains.

“ACSA and its members will work with the government to ensure that the performance rating system and comparison tool add value to the quality system.

“These tools must be fair and accurate for providers while giving older people and their families clear and meaningful information about aged care.”

“Australia has a good aged care system and a good system can always do better,” he says.

“It is in this context that our industry supports initiatives that contribute to continuous improvement in the quality of care, support, services and accommodation provided to older Australians.

“We all want a high quality aged care system, a system that assures the community of the safety, wellbeing and quality of life for older Australians receiving care.

“Our industry expects this, and all Australians will settle for nothing less.”

Do you need help with aged care services for a loved one, or are you concerned about elder abuse? We are experienced in all aspects of elder law. Contact us today – we offer a FREE, 10-minute phone consultation.