What Are the Risk Factors for Elder Financial Abuse? 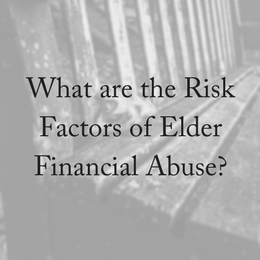 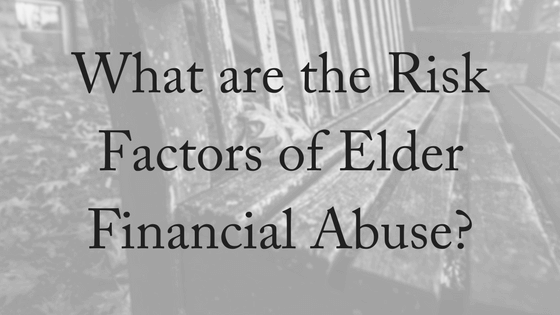 Elder financial abuse is a significant and growing issue, and one way to prevent it is to be aware of the risk factors for elder financial abuse. This is especially important as we are living longer, while greed does not seem to be a declining in any way at all.

What is behind the explosion of elder financial abuse? It seems that greed is one of the biggest risk factors for elder financial abuse. Philippe Gigantès, history professor and retired Canadian senator, suggests in Power & Greed: A Short History of the World (2002) that the highlights of human history have been part of an ongoing quest to gain power, “the best instrument for satisfying one’s desires.”

“Whatever their culture and epoch,” writes Gigantès, “mankind has sought to acquire what it takes to satisfy five basic desires: security, shelter, sustenance, sex (for pleasure or progeny) and self-expression. To avoid chaos, society needs rules that limit the freedom of its members to pursue their desires.” 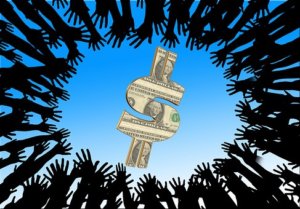 Gigantès’ synopsis of society depicts a perpetual conflict between the drive to fulfill personal appetites and organized efforts to contain that drive. Some don’t do so well in containing their drive – greed and the abuse of power is evident in the many cases of elder financial abuse.

We are a nation that is rapidly aging, but not rapidly dying. As leading demographer and columnist for The Australian Bernard Salt has recognised, the average Australian now lives to 82, up from 63 in the mid-1930s. The centenarian demographic — those aged 100-plus — is one of the fastest growing.This means that we have an increase in the number of people who are more vulnerable to elder financial abuse. Very old age is just one of the risk factors for elder financial abuse.

A 2010 national U.S. study found that “over 5% of Americans ages 60 and older were financially exploited by a family member in the past year, and in 2011, approximately 7% of adults ages 65-74, and 6.5% of adults age 75 and older were defrauded by strangers,” notes SIFMA, the securities trade association. So elder financial abuse can be perpetrated by those well-known or in positions of trust with the victim, or perpetrated by complete strangers as is the fact with most incidences of fraud.

Declining physical health: This can be because of physical impairment due to illness or age .  They are more dependent on others and the risk increases.

Cognitive impairment: With the rise in medical technology and health-care we are seeing an increase in age and often comfort in those later years, but dementia is a rising issue with no cure yet in our sustained longevity. According to information Alzheimer’s Australia gathered on the Health Direct website, there are more than 353,800 people in Australia with dementia. This is in a population of more than 24 million people.

Those who are cognitively impaired will struggle with simple banking and not have the capacity to question suggested ‘investment opportunities’. They may not remember how much money they had in their wallet or whether they are up-to-date in their repayments on the new TV they were sold. Cognitive impairment is one of the biggest risk factors for elder financial abuse.

Social isolation: Living alone or not having very many social connections leaves elderly people very vulnerable to abuse of all kinds. “Older people who are embedded in dense social networks,” 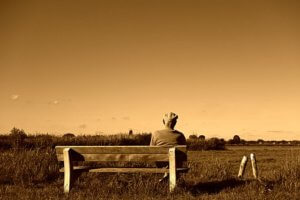 It’s no secret that swindlers know that an elder who is isolated from family and friends is an easy mark. Notes Marguerite DeLiema of the Stanford Center on Longevity: “Social isolation is not only a potential risk factor for financial victimization, it is also a tactic perpetrators use to manipulate their victims and hide acts of exploitation,” Prof. DeLiema states. “Fraudsters and financial exploiters use undue influence – the substitution of one person’s will for the will of another (Quinn, 2000) – to limit and control an older person’s social interactions, thereby creating a sense of powerlessness and dependency. This makes elders easier to manipulate, even if they are mentally competent. In one of the elder fraud cases I studied, a caregiver isolated the older person from her family and withheld food to coerce her to sell property and fire a long-term accountant.”

Challenges with day to day living: If an elderly person is having trouble with looking after themselves and their home then they are likely to have issues in being able to keep track of their money. This leaves them much more open to someone willing to prey on the vulnerable. Often an older person will suddenly acquire a new ‘friend’ who is willing to do their shopping and pay their bills for them, while siphoning away money for their own use.

There are signs that may indicate an elderly loved one is being financially abused including:

If you’re worried that an elderly loved one is a victim of financial abuse then you need to do something about it straight away.  At Estate Battles we understand the urgency and compassion required in these situations. We offer a free, 10-minute phone consultation with one of our estate lawyers. Please contact us today!