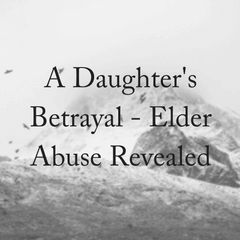 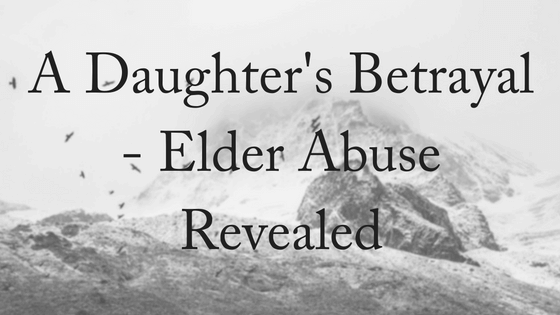 Family elder abuse happens a lot more than we think or than we anticipate.  When one man lost his life savings to his daughter, he just joined the ranks of many other elderly who have been abused and betrayed by family. Family elder abuse is often happening to those around us, concealed by family members who appear to be doing the right thing.

[Tweet “The daughter he trusted was stealing from him.”]

Ray, 85, who is blind, was dependent on Helen, and says, “I was led to believe she was doing everything for me. She was alright but she was doing everything for herself – with my money.” The financial elder abuse perpetrated by Williams was motivated by gambling and a drug addiction, she claimed during court proceedings. She has been sentenced to 12 months home detention for robbing her father of $320,000 over two years.  She left him with just $20. Ray says, “I never dreamt that she would do it. I was completely taken in by it and by the time I had woken up to what happened, it was too late. As far as I am concerned she’s not my daughter.”

Call it blatant stealing or call it inheritance impatience (Ray was going to leave her half the money when he died) but the ugly truth is that it’s family elder abuse.  Ray has been left with nothing, now living in a sparsely decorated room in an aged-care home with only meagre possessions. Saddest of all is the broken relationship he has with a daughter he thought was looking after him, when really she was lying to him, using him and socially, psychologically and financially abusing him and the position she had as power of attorney for him.

“Every time she was at my place – she’d be there most times – she told everyone that I was not there. She cut me off from anyone that I knew,” says Ray. This occurred during the time she was stealing from 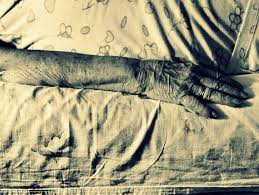 him, whilst reassuring him that everything was fine.  Her true deviousness was not revealed until Ray’s lawyer turned up to tell him he had just $20 to his name. Ray says, “I still think back on the episode and about what’s happened but I will never forgive her for what she’s done to me.”

Unfortunately, Ray is just one of about 25,000 elderly people in New Zealand who are abused or neglected each year.  In Australia, about 5% of our elderly will experience some form of family elder abuse. Elder abuse includes financial abuse, social abuse, physical abuse, sexual abuse, psychological abuse and neglect. In about 90% of elder abuse cases in Australia, a family member is the perpetrator – usually an adult son or daughter.  Statistics tell us that the most likely target is an elderly, frail woman more than 70 years old. Having a cognitive disease like dementia increases the likelihood of family elder abuse – particularly when such a disease makes the older person act aggressively.

David Lloyd, who is the elder protection coordinator in Tui Ora, a health and social services provider, says 85% of the abuse he deals with is committed by family members. “Our elder abuse is that hidden unknown.  People’s don’t want to acknowledge that it’s there,” he says. The close relationships often stop any abuse being reported, as victims don’t want to get their loved ones into trouble. They may also be embarrassed or ashamed, and don’t want to drag their family name through the mud. The thought of police proceedings and a court case may also feel like too much stress for an older person to bear.

But justice is being dealt for those whose abuse is uncovered.

Just this month, Terrence Peter Heppell, 65, and Erica Beth Heppell, 66, both from Tikorangi, New Zealand, were sent to prison for two years and nine months. The pair pled guilty to the mistreatment of their 93 year old mother (and mother-in-law), Beatrice Emily Heppell.  Beatrice was found by ambulance staff lying in a bed covered in her excrement and soaked with urine.  Sores and wounds covered her body which had been left untreated for weeks. One of the ambulance staff who attended the call-out retched due to the horrendous smell in the bedroom. Beatrice suffers from advanced dementia and was “entirely at the mercy” of her son and his wife, whom the Judge Chris Sygrove said showed no insight into how their lack of care had contributed to the “appalling” condition in which medical staff found Beatrice Heppell.

In August of this year, Cindy Taylor was found guilty of the manslaughter of her mother. The maximum penalty for manslaughter in New Zealand is life imprisonment. Taylor’s mother, Ena Lai Dung, was found covered in flies and maggots.  She died from malnutrition and dehydration and her skin was covered in chemical burns caused by her own urine. She weighed only 29kg at the time of her death. 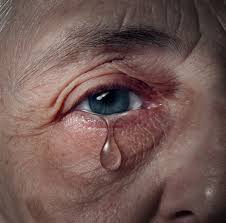 While there is small comfort that those who abuse may pay for their crimes, how can we help prevent these same betrayals and atrocities from happening over and over?  Being able to identify some of the risk factors should help us to be more vigilant of the vulnerable elderly.  These are the people who are at heightened risk of abuse according to the  Elder Abuse Helpline and Resource Unit:

Are socially and geographically isolated and lack connection from their neighbours, family and/or community

Dependent on others for their care

Have insecure or inadequate accommodation

Lack capacity and ability to self advocate – may be confused about their property, bills, belongings and/or surroundings

Are in poor physical health/frail

Have family conflict or dysfunction

Are living with domestic violence

If you suspect that a loved one is experiencing family financial abuse, please contact us for a free, 10-minute phone consultation. The sooner you seek help the easier it is to remedy the situation. Once assets are sold or spent, it is unlikely that they can be restored. Please call us today!