Did This Billionaire Suffer Undue Influence? 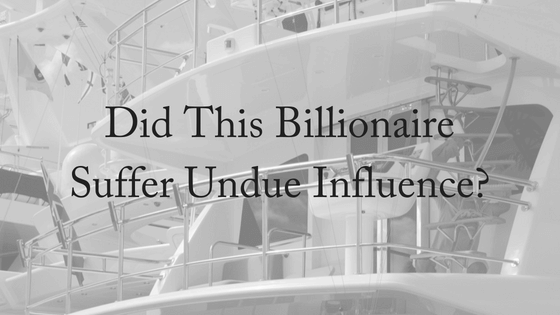 Tom Benson was the billionaire owner of sports teams in New Orleans and businessman who died this year. But the estate battle over his fortune began before his death, amid accusations of undue influence.

A lawsuit filed in January 2015 claimed that Benson was being manipulated by his third wife, Gayle Marie LaJaunie Bird, to cut his grandson Ryan, his granddaughter Rita, and his daughter Renee out of his life. All three worked in some capacity for Benson, as owner of both the Saints and the New Orleans Pelicans, until December 2014, when they were suddenly all but disowned by Benson.

The swift and ugly separation kicked off a legal battle during which Renee, Rita, and Ryan sought to demonstrate that Benson, who was being treated for Alzheimer’s and dementia, was being isolated and manipulated by his wife, for the purposes of extracting as much personal wealth from his estate as possible.

it began with family tensions between Benson’s third wife, Gayle, and his daughter and grandchildren. It had gotten so bad that Gayle had written up a list reminding the twice-widowed Benson why he should be aggrieved toward granddaughter Rita, grandson Ryan and his daughter Renee.

Unbeknownst to the family patriarch, Rita had secretly recorded a conversation she had with him about why her mother, Renee, had contacted Benson’s bookkeeper directly, instead of going through him.

It was amid this poisonous climate that the owner of the NFL’s Saints and NBA’s Pelicans finally decided to turn his back on Rita, Ryan and Renee, his daughter from a previous marriage — and make Gayle the heir to his billion-dollar business empire.

The move kicked off a convoluted legal battle pitting Benson against his daughter and her children, who once had been in line to inherit everything but were now fired from their jobs with his businesses and cut out of his will.

The most bitter episode of the saga was their unsuccessful attempt to convince a New Orleans Civil District Court judge that he should restore their standing with Benson on the grounds that he was too mentally enfeebled to alter his succession plans.

Both sides appeared to view the secret recording Rita made of her conversation with her grandfather on Dec. 19, 2014, as a notable piece of evidence.

Benson’s lawyers argued that the recording was evidence of treachery. They said the billionaire businessman had been receiving pain medication through an IV and was in no condition to talk when he was approached by Rita.

Benson said the medication was making him feel loopy and repeatedly tried to cut the conversation off, “but she spent 90 minutes” badgering him, insisting that her grandfather was overreacting to Renee’s efforts to get financial information from his bookkeeper, according to Benson’s legal team.

Two days after the exchange, Rita confronted Gayle and accused her of trying to come between the LeBlancs and the family patriarch. Another episode involved the list Gayle Benson prepared to help her husband remember the reasons he was upset with his daughter and grandchildren, whose lawyers argued that the list poisoned Tom Benson against them. They said many of the items on the list were in Gayle’s words, not Tom’s, and they cited it as evidence that she was exerting undue influence on her frail husband.

When the judge ultimately ruled in Benson’s favor, he said he had given considerable weight to the testimony of Benson’s former home nurse, Takiyah Daniels. Benson was eventually found mentally competent, and the move against his family was ultimately upheld in court.

What is Undue Influence?

Undue influence or undue pressure is one reason a will may not reflect prior wishes and conversations, or why a sudden new will appears. It is also one of the reasons for contesting a will.

Undue influence occurs when a will maker is put under pressure by the conduct of another person.  It usually involves a family member, friend or trusted acquaintance. Undue influence is when one of these people has exercised influence with the intention of forcing a desired gift in the testator’s will that is contrary to the true will of the testator.

Undue influence often, but not always, occurs in relationships where there is an inequality of power, causing the weaker party to submit to the wishes of the dominant party.

It can be difficult to prove that the will maker has been unduly influenced, but if you are one of the people who has grounds to challenge a will then it is important to speak to someone experienced in estate law. You will need someone to represent you if you decide to contest a will.  The people who usually have grounds to contest a will include a spouse, a child, a grandchild or a dependent.

Because it is a complex area of law and strict time-limits apply, if you think that you have grounds for contesting a will then you need to seek advice quickly. Estate Battles are your will dispute experts. For your FREE, 10-minute phone consultation, contact us today.