Changing Your Mind and Changing Your Will. Re: Picking and the hack that doesn’t work Written by Lindsay Chan 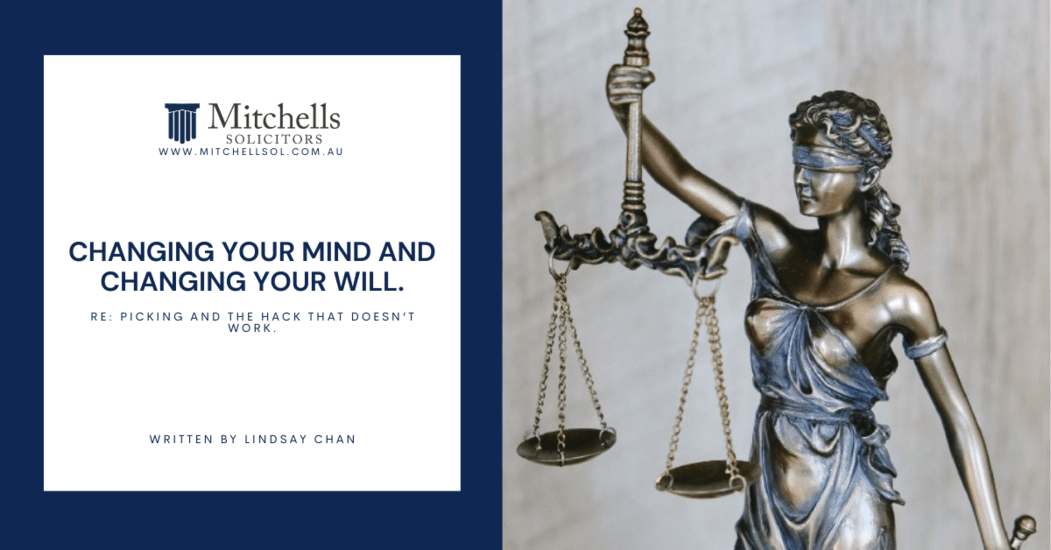 Re: Picking and the hack that doesn’t work

Everybody loves a life hack; a usually simple and clever tip or technique for accomplishing a task easily, and in a much shorter time. Hacks eliminate life’s frustrations and free up more time to do the things that are important. Making a will and keeping it updated can be both time consuming and frustrating so why bother seeking legal advice to make those changes when you could do it yourself?

In Re: Picking, Valerie Picking did exactly that. She had made a will in 2001, which had been filed with her solicitors, but then nineteen years on, things had changed. Valerie made some alterations herself on a copy of her will and placed them in a safe place, giving her niece Wendy instructions where she could find the altered will, which hadn’t been signed or witnessed.

What Valerie forgot was the rule of due process, which states that legal matters need to be resolved according to established rules and principles. In creating her own will hack, Valerie had inadvertently caused her executors more problems, as when she died in 2020, an application had to be made to the court for them to decide whether the informal will was valid and probate could be granted.

The original will Valerie made had been kept at her solicitors and was now filed at the court registry, so how did the courts determine if Valerie’s alterations to her will were valid?

Before applying for probate, the executors had made a number of investigations and had filed a number of disclaimers of gifts from the beneficiaries mentioned in the alterations with the court. It appeared that a number of gifts mentioned in Valerie’s amendments had already been gifted by her before her death and therefore Valerie’s alterations would have no real impact on the formal will made in 2001. Despite this, and the cooperation between the beneficiaries, the court still had to decide if the altered will was valid.

The court considered the Succession Act 1981 (Qld)  and in particular section 18 which states:

The Court may dispense with execution requirements for will, alteration or revocation which purports to state the testamentary intentions of a deceased person; and has not been executed under this part.

In making a decision the court may, in addition to the document or part, have regard to -

Davis J reaffirmed that there were three questions of fact that should be answered by the court when considering making an order to dispense with the  execution requirements that were featured in the case of Hatsatouris v Hatsatouris:

Valerie’s executors had the amended will and her handwriting was recognisable. In drawing her nieces attention to the amended will and in letting her know the location of it, the court held that she demonstrated her intention that the amended copy would operate as her will and it was ruled that the altered copy was an informal codicil and  probate of both the formal will and Valerie’s informal, unsigned and unwitnessed codicil was granted.

It could be said that Valerie’s will hack had worked. Even though the will was improperly executed, the court had still established that the informal will could be included in probate by following section 18 of the Succession Act and the guidance contained in Hatsatouris v Hatsatouris. What Valerie didn’t realise though is that only the courts can make that decision and not the executors. The will hack had caused legal costs to the estate which wouldn’t have been needed if Valerie had amended her will formally.

If you’re thinking of making alterations to your will then it pays in both time and money to remember that only the courts can decide the validity of a will. Even if you make your intentions clear to your beneficiaries and executors, if you haven’t had your changes witnessed in the same way as you would a will then your codicil might not be valid. If the courts do grant probate there’s still been unnecessary costs incurred by having to make the application in the first place.

So save the life hacks for figuring out how to remember where you’ve left your house key and when it comes to making changes to your will save money and time by seeking advice from a suitably qualified solicitor.