Charity Bequests: Should You Do It? 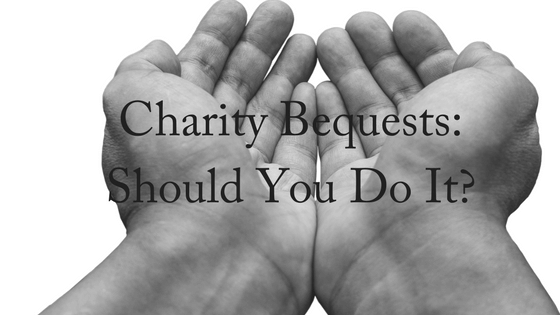 Are charity bequests a good idea in your will? Charity bequests occur when people leave part of or their entire estate to charities of their choice upon their deaths.

The answer regarding charity bequests must often be decided by the court. In the United Kingdom, Margaret Watson was in her mid-70s when she decided the time had to come to put her affairs in order.  As she sat down with her solicitor, she was at pains to stress that she wanted her children and grandchildren to be provided for after her death.  At the time, in 1991, her main asset, a four-bedroom, semi-detached Victorian house in a middle-class suburb on the outskirts of Manchester, was valued at £45,000.

Mrs Watson decided to leave £15,000 to her daughter, Doreen; £5,000 to her two sons; and £10,000 to her grandchildren.  A close friend was to be given £1,000, and the neighbour who had popped round twice a month with his petrol mower to cut her lawn was bequeathed £500. Once the funeral and legal costs had been paid, any remaining money would be divided between two animal charities — the RSPCA and the Manchester & District Home For Lost Dogs. It was another 19 years before she died in 2010, at the age of 95, after years of being cared for by her daughter.

However, her wish that her relatives would find the management of her estate a painless affair would not be fulfilled. After her death, her two surviving children discovered that rather than getting the bulk of her estate, as she had intended, they would only receive a fraction each. The reason was that Mrs Watson’s home had appreciated in value to nearly £200,000. This meant the £30,000 she had bequeathed to her family appeared woefully small compared with the £60,000 that each charity was to receive.

It’s a common situation. The wealth of the over-50s — the baby boomers — has soared thanks to rising property prices across many Western countries including Australia, but many have failed to update their wills to take into account the increased value of their home, so charity bequests often end up being far bigger than the legacies bequeathed to loved ones.

In another UK case, Heather Ilott received £164,000 after successfully challenging her mother’s will, which left nearly £500,000 to the RSPCA, Blue Cross and the RSPB. Despite Melita Jackson’s will and clear accompanying letter – “If my daughter should bring a claim against my estate, I instruct my executors to defend such a claim as I can see no reason why my daughter should benefit in any way from my estate” – the court of appeal ruled that Ilott, a mother of five who lives in social housing and has never had a holiday, had a real need for some of her mother’s money – unlike the charities.

In Australia, the chief of the Heart Foundation Maurice Swanson says that people who leave large charity bequests in their wills are increasingly having the wills challenged in court by family members who feel they’ve been left out. Foundation executive director Maurice Swanson said some people were leaving their entire estate to be shared by the foundation and the Cancer Council. This was probably because they were well-recognised and established charities, and heart disease and cancer were responsible for many premature deaths. People often wanted to repay them for the research and support services they funded. 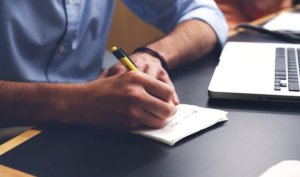 “But we’ve noticed a greater number of wills being challenged, where children believe they’ve been inadequately provided for under the Family Provision Act,” Mr Swanson said. He cited one case in which a farmer left most of his assets, worth $1.5 million to charities, believing that he’d provided for his children in other ways.  In another case, a donor had left the bulk of his estate to the charities but it had been contested by two siblings. To avoid a lengthy court battle, the foundation had offered to accept $50,000 — well below the bequest amount.

A 2008 study reveals that about one in 14 Australians leaves a bequest to charity, but their wish is likely to be over-ruled if relatives contest the will. The survey of 46 major cases by the Brisbane-based Australian Centre for Philanthropy and Nonprofit Studies, found that charities lost the entire bequest in six instances and had it substantially reduced in another 35. “It is difficult to understand why in 2008, an adult of full capacity and understanding cannot choose to leave the entirety of his or her estate to charity, after having provided for any surviving spouse and dependent children,” centre director Professor Myles McGregor-Lowndes said.

The co-author of the new report Every Player Wins A Prize, he said legal challenges to wills had become more common, and predicted that battles between families and charities would continue to grow as the wealthy generation of baby boomers died over the next few decades. These cases highlight several important truths:

We offer a FREE, 10-minute phone consultation. Contact us today!