The subject of death doesn’t seem like a usual choice for holding a festival.  We have music and arts festivals, beer festivals (Oktoberfest), Christmas and Chinese New Year – these are more obvious candidates for celebration. But that’s changing.

While there is a Mexican holiday called Dias di los muertos (Day of the Dead) which focuses on those who have already died, these new festivals that have started are about preparing for and thinking about your coming death. Death, dying and our own mortality are often topics that we avoid, though of course we know that our own deaths are inevitable. These festivals hope to change that and empower people to make good decisions about what they’ll do with the life they have left and to encourage end-of-life planning. Really – it’s helping people to plan for death.

What To Think About When Planning Your Death

Tom David, 62, attended Indianapolis’ Before I Die Festival, a weekend-long event with 22 activities held around the city.  He had recently had a heart attack and had been thinking more about life 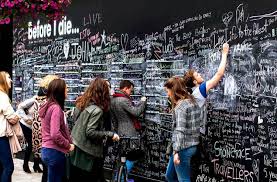 and death.  As many people gathered around a board planted in the middle of a cemetery entitled “Before I Die, I Want To. . .”, Davis’ contribution was “I want to see my grandkids grow up.” Others had some serious and some more fanciful ideas like: ‘finally see Star Wars’ and ‘hold a sloth’. The original festival was held in Cardiff, Wales in 2013 and has spread to the U.K. and now the U.S.  The festival’s organiser, Lucia Wocial, a nurse ethicist, says, “This is an opportunity to begin to change the culture, to make it possible for people to think about and talk about death so it’s not a mystery”.

Modern medicine means that we have new ways to prolong life.  Wocial says, “Death has changed. Years ago people just died. Now death, in many cases, is an orchestrated event.” Patients and families are forced to make a lot of end-of-life decisions about things people may not have thought of in advance. “You’re probably not just going to drop dead one day,” she said. “You or a family member will be faced with a decision: ‘I could have that surgery or this treatment.’ Who knew dying was so complicated?”

[Tweet “Dying can be complicated. What decisions are you making now for your death?”]

A workshop on advance care planning was held by the festival organisers, including all the things to think about for an advance directive (in Queensland it’s called an advance health directive) and how to fill one in. Other conversation topics the festival organisers were hoping to spark included funeral arrangements, wills, organ donation, and the difference between a good and bad death.  A crematorium tour was offered and on it people learnt what they could do with human ashes, including blowing them into glass or, at (a cost of $10,000) turning them into a diamond.  It is helping to take away the mystery of death and encouraging thoughtful consideration now so that decisions don’t need to be made in crisis down the track.

Many of us haven’t planned how we want our lives to end.  Death has been a far-off and abstract idea.  Ken Hillman, professor of intensive care at the University of NSW, says, “Ask yourself, what sort of state would be unacceptable? You might not want to be in a state of constant pain. You may not want to live if you have no control over your bowel movements, you’re demented, bed-bound or you don’t recognise your family.”

You may also decide that when the time comes, medical intervention be withdrawn. For example, A ‘DNR order’ (Do Not Resuscitate) is a medical order to withhold cardiopulmonary resuscitation (CPR) techniques. You may also wish to die at home rather than in a hospital, or you may choose not to accept life-prolonging treatment once your quality of life is permanently impaired.

Putting these kinds of decisions off is unwise when tomorrow everything can change.  Organising your advance care directive and letting your family know your decisions will mean that you get to choose the conditions under which you are kept alive if you have a serious injury or illness. Your family members can’t choose to stop treatment if you don’t have the legal documents prepared and signed. “Hardly a day goes by when I don’t look at someone on a life-support machine and think, ‘Don’t ever let this happen to me.’” says Hillman. 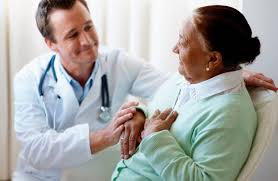 While Hillman is confronted with death and the decision-making that goes with that everyday, there are other doctors who are not quite as aware. Some of Australia’s most senior doctors say that Australia is developing a death-denying culture that needs to change.  Only 17% of physicians believed that doctors were always aware of their patients end-of-life desires according to a recent survey by the Royal Australasian College of Physicians.  “We still all have to die and there’s still a period where we can no longer really extend life,” the college’s outgoing president, Professor Nick Talley, said. “There is a bit of death-defying culture, one almost might believe, some people believe they won’t die.” Doctors are integral in helping to start these conversations.

Catherine Yelland, the incoming president, stresses that there are many benefits to planning end-of-life care. “It means that we can then try to fulfil the patient’s wishes as much as is possible, that we actually understand what it is they want, how they want to die, where they want to die,” she said. “It also means that their family is aware that this is going to happen and can prepare for that, and can also respect the person’s wishes in terms of their treatment and how best the family can help with that.”

[Tweet “What kind of death are you hoping to have?”]

Before you die, what would you like to do?

When you die, what kind of death are you hoping to have?

If you’d like help with your end-of-life planning then please contact us today.  We can help you to organise an advance health directive and draw up a will.  We offer a free, 10-minute phone consultation with one of our experienced estate lawyers.