Do Will Disputes Mean War? 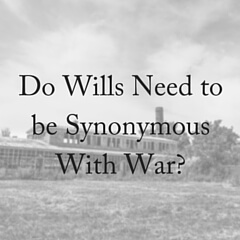 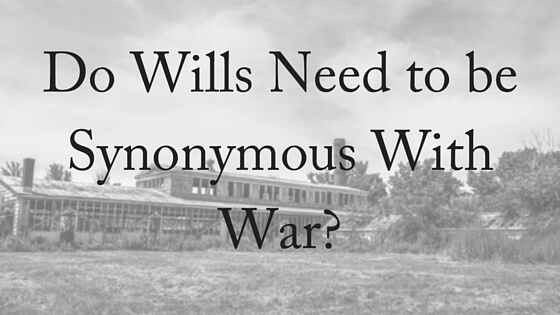 Why do will disputes so often turn into war?

The pain and wounds from these kinds of battles can have a lasting impact on generations to come, yet will disputes are becoming more common. One such story is that of ‘Michael’s’ family.  Although several generations removed from the will-owner (his great grandfather) the bad blood is lasting.  Michael’s account is this:

He and my grandmother moved into the house. After my great-grandmother died a year later, my grandfather asked his brothers to move out. A huge argument over the issue became violent. My grandfather was pinned to a wall with a pitchfork at his throat by one of his brothers. This incident has rippled through the generations and the people involved rarely spoke, except at funerals.

My own father carried this during his life and made a point of being in a position to lower his uncle’s coffin into the grave when he died (the one who held a pitchfork to his father’s throat).

I eventually inherited the land. There is still bitterness about the original will from cousins and other family members. It was never really resolved but I sold the house. The house accidentally burnt down soon afterwards, something relatives blamed on the sale.”

[Tweet “Will disputes may leave wounds in families that last for generations.”]

Will Disputes Bring Out The Best And The Worst

When it comes to wills, inheritances and money we often see both the best and, more often than not, the worst in people. Families that appear relationally intact can unravel in an instant over a will. 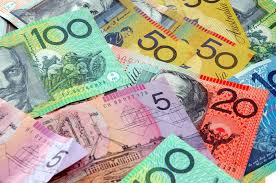 The distribution of deceased estates has become a growing battlefield in Australia.  This is in part because of our changing culture and the increasing complexity of family arrangements. Blended families, step-parents and children, or siblings looking after elderly parents can all be a part of our changing family landscape. Conflicts that did not exist before can arise post-death and a sense of entitlement by different  family members can result in will disputes that cost almost as much as the small amount being fought over – and sometimes worse.

In Queensland alone, 80 to 90 small estate family provision claims were lodged in the ­Supreme Court every month.

Small estates were those valued at about $500,000 and based around a primary asset such as a house.

Will disputes were commonly between a second spouse and children from a first marriage, but the large number also reflected changing social attitudes and greater knowledge of court challenge ­options.

Some in this specialized area of the law believe it will only get worse. There is a distinct change in the estate dynamic. People are more wealthy than previous generations, and have more assets worth more money, so families want their share. There seems to be a ­societal shift to towards a greater sense of entitlement, and even a sense of frustration when an older family member lives ‘too long’, using up the inheritance. Perceived favouritism of siblings or tension between step-siblings are commonly the source of will disputes.

The Cost is not Always Worth it

Research conducted by the University of Queensland, QUT and Victoria University, found 74 per cent of family challenges to wills were successful. These will disputes, though, were known to drain the entire proceeds of an estate.

These cases are labour-intensive, and the same administrative procedures and standard responses need to be followed, no matter how small the estate. Where agreement between the parties isn’t possible, the only option left is to go to court.

[Tweet “While some will disputes end up in court, it is possible to reach settlement out-of-court.”]

The growing cost of families in fight-mode and the fractured relationships left in the wake of such disputes demands community and legal re-education.  Mediation is a much more money saving and less emotionally distressing avenue than litigation.

Some survey findings of law firm Slater and Gordon suggests that Australians do not like sharing inheritance with non-family members. The new research, based on a survey of 2000 people, found 63 per cent of people did not ­believe that a non-relative was entitled to a significant inheritance even if they visited someone regularly, helped with daily tasks and celebrated holidays together.

This survey shows that people needed to be mindful when they were drafting wills of the potential to create family disputes after their death. Cutting out a child in favour of the gardener is cliched but almost guarantees litigation after your death.

The survey would indicate that the majority of people feel that assets should stay in the family. Yet quite often people don’t have family, or aren’t close to their family members, so they choose to leave their assets to people who they have forged a strong relationship with — and that’s well within their rights. But in Queensland, the law is clear that only family members – indeed, only certain family members –  have the right to contest a will, so a willmaker should be very clear and concise about how their assets are to be distributed, why, and the likely consequences. A specialist in succession law (wills and estates) will be able to provide advice about the consequences of your final wishes.

How to Avoid a Fight After You’re Gone 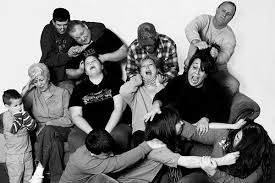 Will disputes do not usually come out of nowhere.  Often they can be anticipated and avoided.  Here are some signs that point to the greater likelihood of your will being challenged:

Sibling rivalry: tensions can rise when a loved one has gone.  By appointing an objective third party as trustee you may ease this tension.

Undue influence: often there is one person who ends up taking the most care of an ailing family member.  Avoid undue influence by having a great relationship with parents.

Late marriage: resentment can blossom in these situations.  Making sure that estate planning is up-to-date and asset division is clear can halt conflict before it starts.

Advance benefit to one heir (and not the others): Help with a house down payment or debt bailout may cause angst between heirs during probate unless it is acknowledged and accounted for in the will.

Estrangement or disinheritance: Lessen the chance of a willing challenger by ensuring that your will is clear and estate planning up-to-date, especially in blended family situations

Although you can’t account for absolutely every scenario because of the complexity of human nature, making sure that your estate planning and will are well prepared and kept up-to-date with the help of an experienced legal professional provides a solid foundation for avoiding will disputes after your death.

For a free, 10-minute consultation with Bryan Mitchell, an Accredited Specialist in Succession law, please contact us today!