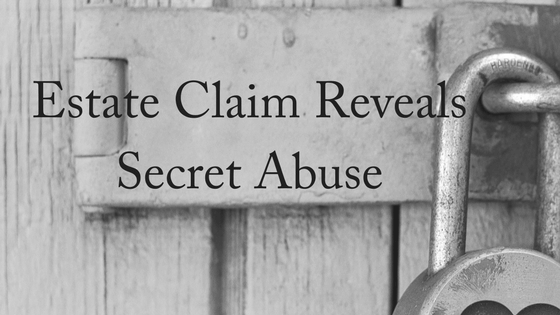 An estate claim has revealed a family’s horrific abuse, which was kept secret so that the victim would receive a million-dollar inheritance. Under what circumstances should you promise your estate to your children?

A woman in Victoria promised to include her daughter in her $6 million estate if she promised to keep her sexual abuse at the hands of her father a secret.

However when the mother died in 2012, aged 93, she failed to keep her promise and left the bulk of her estate to her two sons. She left $1.3 million to her daughter while each son received over $2 million. She also excluded her grandson completely from her will, who had reported his grandfather to the police for sexually abusing him when he was only four years old.

The daughter sued her mother’s estate, making an estate claim that sought a larger portion of the $6 million. In her claim, the daughter said her mother promised her that she would receive “an equal share of the family wealth as the price for her remaining quiet about her father’s sexual abuse of her”.

The court heard that the daughter was 14 years old when her father began to abuse her, threatening her that he would kill her if she told anyone. The abuse continued over the next twelve months. When the daughter began to fear she would become pregnant because of the abuse, she decided to tell her mother. Her mother told her she would ‘take care of it’, and several days later the father apologised.

The daughter pleaded with her mother to leave the father, but the mother refused, saying that if she left her husband, the daughter would lose out as the estate they were building together would go entirely to her husband.

The daughter said that although her father did not abuse her again, he made her life a living hell with his emotional abuse of her from that time onward. When he died in 2007, the mother told the daughter she had stayed in the marriage for her sake so that “this will all be yours one day.”

The judge said in the ruling that the mother had failed in her moral duty towards her daughter. “The deceased knew of her husband’s abuse of [the daughter] yet remained silent about it. She could not or would not stand up to her husband and she feared the family wealth would be at risk if she did take any action to report him.

“The deceased should have recognised that [the daughter] would suffer consequent emotional and psychological damage caused by the sexual abuse.

“In extracting [the daughter’s] silence about the abuse and failing to protect her, the deceased owed [the daughter] a significant moral duty.”

Who Can Make an Estate Claim?

Certain relatives of the deceased person have the right to make an estate claim if they feel they have been unfairly provided for under a will. The relevant section of the Queensland legislation is s. 41 of the Succession Act:

It is important to note that each estate claim is decided on a case-by-case basis, with all extenuating circumstances considered. Though it may be tempting to seek revenge from beyond the grave by excluding a relative from the will, the reality is that the court has the authority to overrule the will.

While the case example may seem drastic and you know that it won’t happen to you or your family, it is always best that you seek legal advice. Writing a will can be incredibly complex and you will want to make sure you got it right for the sake of your beneficiaries.

We offer a FREE, 10-minute phone consultation. If you have any questions about a will, an estate or a family provision claim, contact us today. If you need any assistance, we are always happy to help! If you have a legal issue that may exceed 10 minutes of discussion, we are happy to book an appointment to ensure that your legal issues are solved to the best of our ability.