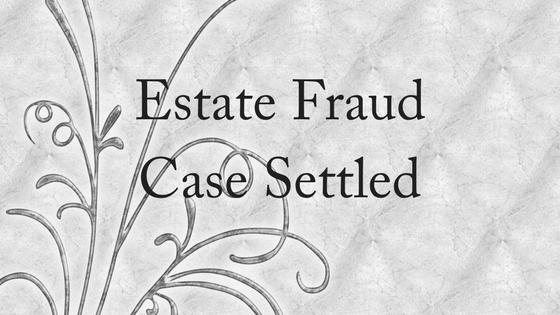 An artist’s daughter has won her 15-year court battle to control her father’s $60 million estate after years of alleged estate fraud.

King had accused her brother and nephew of tricking Wang into giving them control of his estate, then selling off the art under the table until the estate’s value dropped to a measly $2 million.

For more than a decade, the family of C.C. Wang have been battling over a collection of classical Chinese paintings and scrolls that have been described as the finest in the world. In 2014, two of Mr Wang’s children escalated their estate battle, accusing each other of estate fraud and deceit.

Experts in Chinese art are dismayed over the court battle. It’s estimated that hundreds of works have gone missing, including an 11th-century scroll. “This is heartbreaking, and it’s happening right here in the city,” Laura Whitman told the New York Times. She’s a specialist in Chinese art formerly with Sotheby’s and Christie’s.

For more than a decade, determining who rightfully should own the works and who is to blame for their disapppearance has consumed the Wang family. The case has become so complex that the court suspended hearing matters of inheirtance until a reliable inventory can be taken of the estate – a difficult task when the family are accusing each other of estate fraud amid the disappearnace of valuable assets.

Mr Wang demonstrated the ability to acquire objects of historical importance, objects that since his death have increased many times in value as the Chinese art market has boomed. It is this skyrocketing value that the family have been battling over.

Born near Suzhou, China, in 1907, he moved to the United States during China’s political upheaval in 1949, settling in Manhattan. His career included teaching, consulting at Sotheby’s and dealing in real estate and art. He became the dean of the rarefied market for Chinese art in New York and was an accomplished artist in his own right. By the end of the 1990s, the Met had bought 60 works that were once part of his collection and named a gallery in his honour.

Before his death in 2003, Mr Wang left some works to his daughter Yien-Koo King, and some to his son, Shou-Kung Wang. Both children served during different periods as confidant and business agent to their father.

Mr Wang wrote a will in 2000 that listed Mrs King as executor and a competing will shortly before his death which named his grandson, Shou-Kung’s son Andrew as executor and disinherited Mrs King. The validity of both wills was contested, with Mrs King and Mr Wang each accusing the other of estate fraud.

Since their father’s death, Mrs King and Mr Wang have surrendered more than 120 artworks to the estate for sale, but have also accused each other of hiding many more of the most valuable paintings in the the United States or in China. Estimates differ widely about how many classical paintings were in the collection when he died, from 240 to more than 420.

The Internal Revenue Service are also seeking their share of the estate, asking for $20 million in estate taxes based on its own inventory. The children argue that the inventory is incorrect, based on a valuation of paintings that are now missing.

Mrs King says that her brother and his son had conspired to loot the estate through sham art sales and had lied about the whereabouts of works. In documents filed in court, she says that Andrew made up bogus addresses of buyers and shipped $1.4 million worth of the art to his home in Shanghai.  She says that Andrew and his father have given conflicting accounts of the location of a valuable 13th-century painting – Shou-Kung told the court that his father had given him the painting and that he still owned it. But a 2011 television interview in China shows a collector saying that he had bought the painting from the Wang family after C.C.’s death.

When asked about this in court, Andrew admitted that he had sold the painting without his father’s knowledge and had concealed the sale.

The lawyers for Shou-Kung and Andrew deny the allegations, claiming that it was Mrs King who had diverted assets by hiding works in a warehouse in New York, transferring ownership of them to foreign corporations and selling them.

Something both sides agree on is that one of the most valuable paintings in the estate, a rare example of the Northern Song dynasty of a Taoist theme, has gone missing. It is valued by experts at tens of millions of dollars. It was put into a a Shanghai bank’s safe deposit box in 2005, and was to be opened again only in the presence of both sides.

In 2009, the safe deposit box was opened and the artwork had been replaced by a cheap imitation. Neither side has claimed responsibility and to this day, the location of the artwork is a mystery.

This year, the court battle finally ended, with Mrs King appointed as executor and assuming control of the estate.

in Queensland, executors of an estate have an obligation to engage in the due administration of the estate. Enormous obligations are cast upon an executor to gather in the estate, pay all testamentary debts and expenses and to distribute the estate in a correct and legal way.

If you’d like information on how to appoint an executor, you suspect estate fraud or you’d like to know how to contest a will, get in contact with us today. We offer a FREE, 10-minute phone consultation.