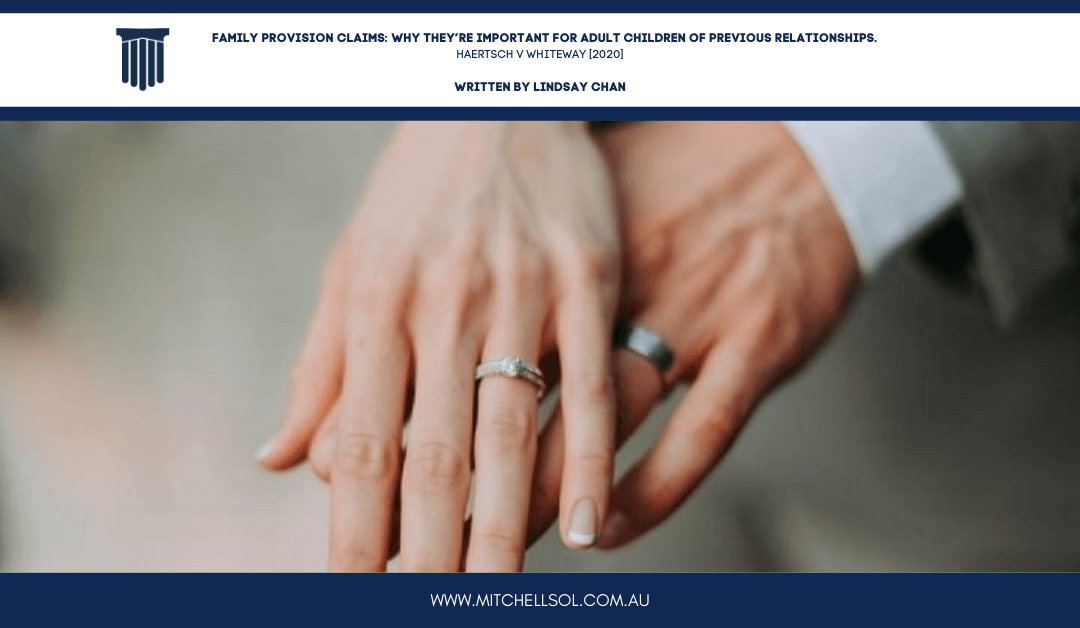 If you’re an adult child from a previous marriage then chances are you’ve faced a number of dilemmas over the years; who to spend the holidays with, who sits where at the wedding and how to become part of a new family when a parent remarries. But when a parent dies and leaves their estate to their second spouse, a whole new dilemma arises;

When is the right time to make a claim from your parent’s estate without unbalancing your blended family?

Elizabeth Whiteway waited until her stepmother’s death to claim her inheritance and in doing so missed out on being able to make a family provision claim to gain a larger share from her father’s estate.

Elizabeth’s mother died in 1985 and her estate passed to Elizabeth’s father, Dr Whiteway, who gave Elizabeth and Jane $30,000 each as a gift from the proceeds of the estate.

Dr Whiteway remarried in 1987 and died in 1993, leaving his estate worth $540,743 and a house worth $1.35M to his 2nd wife of 16 years. A gift of $25,0000 was left to each daughter and in a statement attached to his will, Dr Whiteway explained that he left the majority of his estate to his 2nd wife because his wife was relatively young and he wanted to provide her with security into the future. Dr Whiteway also stated that his daughters who were at that time 33 and 35 years old, were not in any financial need.

Elizabeth and her sister had been told by their step mother that she was very aware that she had a moral obligation to them to make testamentary provision for the money that she had received by being married to their father and Elizabeth did not make a claim against their father’s estate for a family provision order, believing that she and her sister would receive their inheritance when their stepmother died.

The house which formed part of the estate had been owned by Dr Whiteway prior to his 2nd marriage and was sold by his 2nd wife in 2011 with the funds being used by her to purchase a unit in Bowral for $740,000. The 2nd wife retained this unit during her lifetime and it formed part of her estate.

The 2nd wife executed seven wills between 1997–2016 in which she made substantial provision for Dr Whiteway’s two daughters, but with each successive will the provision to them diminished and when she died in 2016 she left her estate, valued at $1.9M, to various siblings, nephews, nieces, a friend, and included $100,000 legacies to each of Dr.Whiteway’s daughters.

By 2016 Elizabeth was 57 and unemployed. She had suffered two failed marriages and was living alone with depression and ill health which made it unlikely that she would work again. Disappointed with the amount left to her and unable to make a claim against her stepmother’s estate, she asked the court to allow an extension for a family provision claim against her father’s estate, 13 years too late.

The original decision went in Elizabeth’s favour with Lindsay J of the New South Wales Supreme Court taking the view that if Elizabeth had made her claim at the time of her father’s death it was likely that she would have been granted additional monies from her father’s estate. The Judge believed that she had a strong case for receiving further provision and the delay in making a claim was explained by the respect Elizabeth had for the 2nd wife who had assured her that she would benefit from her estate.

Lindsay J identified that the proceeds of sale of Dr Whiteway’s house funded the purchase of the Bowral unit for $740,000 and that the proceeds of $966,035 from the recent sale of this unit by Mr Haertsch, who had transferred this property into his name as executor, up to the sum of $740,000, could be designated as notional estate of Dr Whiteway’s estate for the purpose of paying the lump sum and the costs of these proceedings. He awarded Elizabeth an extra $250,000 in addition to the $100,000 already left to her under the will.

On appeal, however, Elizabeth’s claim was dismissed. The New South Wales Court of Appeal held that the statements given to Elizabeth and her sister weren’t enough to excuse an application not being made within 12 months of her father’s death (as is the requirement under NSW law). The primary Judge had failed to take into account the other beneficiaries in the 2nd Wife’s will and the detriment to them in allowing Elizabeth’s claim now, when she was in a far worse financial position than at the time of her father’s death.

If Elizabeth had made a claim against her father’s estate within 12 months of his death she might have been awarded less money than if her stepmother had kept her word and made adequate provision for her, but provision would have been made. Instead, by relying on assurances and waiting for her stepmother’s death, Elizabeth found herself exposed to legal costs and no access to the inheritance promised to her, other than the gift in her stepmother’s will.

Unlike the other dilemmas adult children of previous marriages face, the dilemma of when to claim your inheritance has an easy fix; seek legal advice upon your parent’s death, as you may lose your rights if you wait.