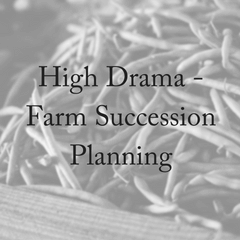 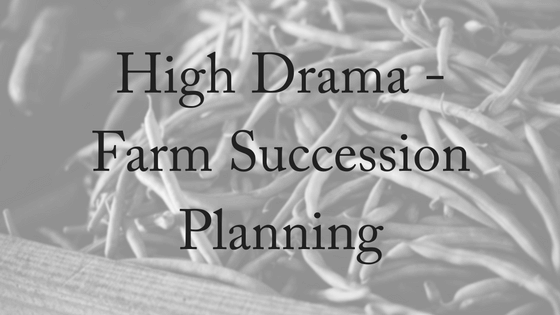 Planning your estate can be complicated enough without considering an agricultural property, but farm succession planning means that you can solve an otherwise difficult and complicated time of transition.

According to the Australian Bureau of Statistics, in 2010-11, approximately 53% of Australia’s total land area was used for agriculture. That’s a lot of farms – including family farms. The operation of a family farm should include farm succession planning and good estate planning.  When it’s not done well, it can lead to high drama for those involved.

[Tweet “About 53% of Australia’s total land area is used for agriculture – that’s a lot of farms.”]

There’s a quote floating around that says, “Families that eat together stay together.”  This is a nice sentiment and there certainly would be some truth in that, except that it’s probably more than just eating that’s going on for these families that stay together.  It’s highly likely that these families that go the distance also talk together.  Communication is essential for good, healthy relationships in any context.  For farm succession planning and estate planning with a farm it is also essential to be communicating well with your family. This ensures no surprises and allows both the planner and those who the plans effect to act accordingly.

Andrew Beattie, the director and chief financial officer for ProAdvice, is very interested in the facilitation of succession.  He says, farm succession planning and estate planning in a family business is a complex juggling of the needs and wants of the retiring generation, the new farmer(s) and their partners and often siblings of the new farmers who will not be farming in the future.  In addition to this there is generally a long multi-generational family history, family members at different ages and stages, a large asset with low and variable return, and a layer of family conflict just to increase the complexity.

Thoughtful planning ahead of time is essential for good farm succession planning and estate planning, as well as good communication.

Garry and Debbie Collins have taken this approach and they started their succession plan when their three boys were just teenagers. Their farm is a mixed cropping and sheep producing operation on just over 10,000 hectares near Morawa, Western Australia. It has been a Collins family property for more than 100 years.  ‘Spearwood’ is currently being farmed by Garry, Debbie and their sons who are now closer to their 30’s.

Part of their succession planning has involved acquiring land and setting up structures for the future transfer of assets. Garry says planning is critical. “You have got to start somewhere knowing 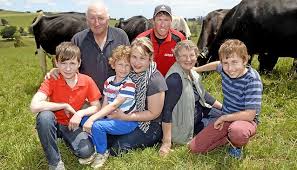 that plans are always going to be changeable and you are ready to change with them. But use the professionals that are out there that can help you.” Jay, Garry and Debbie’s eldest son is expecting his first child with his partner, Jasmine.  It’s obvious that his father’s future thinking has influenced his own.  Jay says it its important to be aware of how quickly the next generation of family comes along.

“In the last hundred years we have had five generations come through this farm and if you work out how many people are divided into an asset base it is quite important that you really focus on that. Probably more so than trying to achieve your goals you have to be aware of the situation of your family business, because you really only have twenty five to forty years to develop it and have something to pass on to the next generation,” he said.

It seems though, that Garry and Debbie are the exception to the rule in terms of their excellent communication of plans. Research shows that communication is not done well when it comes to farm succession planning and estate planning.

Here us some data sourced by Andrew Beattie when he put together a paper for the Australian Government’s Grains Research and Development Corporation. For the main farmer (who is usually a male):

[Tweet “30% – 42% of farmers have not discussed succession planning with their spouse.”]

That’s fairly damning in terms of the failure of communication.  This means that succession and estate planning may not be going so well either. We can see from the Collins’ family that communication has been integral in the implementation of good succession planning.

The reality is, though, even when there is well communicated planning there can still be high drama.  This is the case for a New Zealand family in a fight over a $4 million family farm. Although Edwin and Pamela Talbot had made clear to their three children in discussion about how they would like to divide their estate, one child made a bid to overturn her parent’s wishes. Since 1904, the farm has remained in the Talbot family, with son Graham, who had lived and worked on the farm his whole life, inheriting the land with the purpose of continuing the farm. Jillian Talbot was not happy that she and her sister Rachel have only inherited $1.1 million each.  Rachel said in court that she believed that she and Jillian had been provided for generously, but Jillian disagreed. 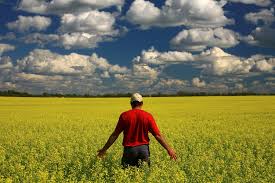 Jillian,  a public relations specialist, claimed in court her parents failed to meet their moral duties owed to her, and adequate provision had not been made for her proper maintenance or support in light of her financial position and her economic needs. She also “maintains her parents have failed to adequately recognise her position in the family as one of their three children” and requested a redistribution of their assets as “current societal attitudes demand a significantly more substantial distribution to her as a daughter from estates such as these”.

Justice Grendall ruled against Jillian’s claim making clear to her that she is in a financially stable position living a “comfortable” and “relatively expensive lifestyle”. He said, “It is hard to see how, in the circumstances an inheritance of over $1 million is insufficient to adequately provide for her proper maintenance and support.”

In his decision, Justice Gendall said Edwin and Pamela’s intentions for Graham to take over the farm and his sisters to get a financial pay out were made clear before they died. “The parents also at times met with the family to explain their intentions, which necessarily meant that overall there was no possibility that all three siblings could be treated equally,” he said. “Edwin and Pamela took advice specific to their intentions over the course of a decade at least.” Because they had been clear in the communications and intentions, their estate plans came to fruition.

At Estate Battles we aim to account for any forseeable dramas in succession and estate planning by helping you to plan well now.  Our estate lawyers offer a free, 10-minute phone consultation. Please contact us today!