Being Financially Prepared for Death 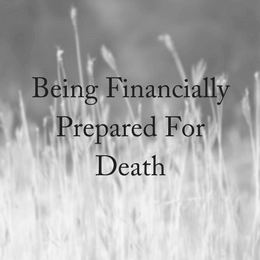 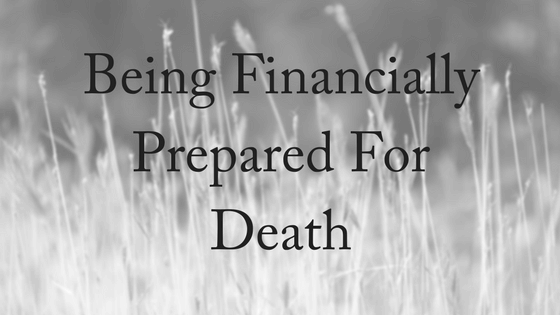 Are you financially prepared for death? When you don’t have estate planning in place it can be devastating to your family. Death can be traumatic and overwhelming, but dying without having your finances in order makes it even more so.

Although many people procrastinate or ignore doing any kind of end-of-life planning, being financially prepared for death is one of the kindest gifts you can give your family.  One of the main reasons is because they don’t want to think about the end of life!  We often particularly don’t want to think about the death of our partner or spouse. More than 800,000 Americans lose their spouses each year, and 700,000 of them are women, according to the Census Bureau. Because women generally outlive men, they spend an average of 14 years without a spouse. There are now more than 14 million widows and widowers, accounting for about one-quarter of the over-65 population.

[Tweet “Many people procrastinate or ignore doing any kind of end-of-life planning.”]

Knowing death is inevitable, and perhaps sooner than we might expect, should be catalyst enough for both parties to be doing more than avoiding discussing what will happen to everyone. It is not just the loss of a loved one that is painful, but when assets are unaccounted for, life insurance policies can’t be found or there is no will then it just gets even harder for whoever is left behind. The financial chaos we can leave behind when we stick our heads in the sand just adds to the burden of grief. Being financially prepared for death allows your loved ones to grieve your death without the added burden of a confusing financial mess.

China – the world’s most populous nation – has the second-largest economy, one of the highest savings rates and mushrooming wealth. Yet virtually no one has a will to pass on an estate. And 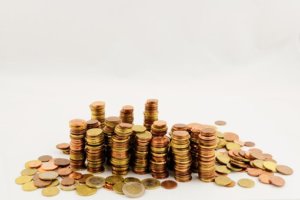 now it’s become a huge problem. The problem has gotten so bad that even the ruling Communist Party — previously no fan of inherited wealth — is concerned. “When people die without a will their children scramble for their property, damaging family ties and having a negative effect on society,” the state-run Xinhua News Agency has warned.

The grief of a family potentially also turns into conflict for a family when loved ones do not attend to simple estate planning matters before they die.

Only 1% of China’s 220 million seniors have drawn up inheritance plans, according to the best estimates. The reason is cultural: talking about death is taboo and writing a will is akin to putting a curse on yourself. Even the rich and educated often don’t write them. Consider the publicized case of Yan Jiying, a coal baron from the northern province of Shanxi. He died in 2015 at the age of 71, leaving his estranged wife, long-term mistress and six children to fight over his assets.

[Tweet “Only 1% of China’s 220 million seniors have drawn up inheritance plans.”]

Preparing For Death Doesn’t Make One More Likely To Die

A financial planner for AMP, Andrew Heaven, says ”thinking about wills doesn’t speed up death”. He believes talking with your family about your wishes for your funeral and the distribution of your assets can limit conflict and stress between your beneficiaries at a difficult time.

Having an understanding of your spouse’s financial position is good preparation for this inevitable time of turmoil. Do you know where key documents are and what they contain? Is there a life insurance policy and who is named as beneficiary? By being prepared you are able to buffer your loved one and create a much better position for the survivor to make good and informed financial decisions.

Mark Germain, a certified financial planner with Beacon Wealth Management in Hackensack, New Jersey, says, “Don’t think of an estate plan as a ‘death’ plan. I try to get that out of my clients’ minds. Many people don’t have a clue as to what will happen with an estate after death.” One client, he said, a 72-year-old man, changed ownership of his assets while his wife was dying, creating financial chaos. Contingency plans should be made in the event one spouse becomes disabled or incapacitated. Prepare a workable estate plan while you are healthy. Cognitive decline can take its toll on couples’ abilities to manage and execute an estate plan. Being financially prepared for death often means that you are thoughtful and considerate when thinking about who you’ll leave behind.

One couple who was extraordinarily well prepared was Erika and John Lupo. When John died of cancer at age 57, Erika, 51, benefited from all of their preparation. They worked with a lawyer who helped them to get things in order before John died. There was a bit of complex estate and financial planning involved, because John Lupo had a daughter from a previous marriage, and the couple has a teenage son. “We made out wills, durable powers of attorney and a trust” for Lupo’s daughter, the lawyer said. “We also made some arrangements for the son in the will. We had to do some sophisticated planning.” For Lupo’s widow, the advance planning came as a great relief even as she mourned her husband. “We had everything in place,” she said. “I had no idea how to do any of this. They guided me seamlessly.” Erika said, “Realize that you need to take the time to understand your finances. When you’re well — that’s when you need to plan.” 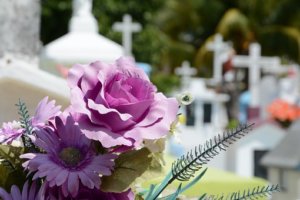 When Camilla Schroder’s mum passed away, she and her brother were appointed co-executors of their mother’s estate. This was a task made much easier because her financial affairs were in order. Her will was up-to-date and the family were able to ensure that there was enough cash to pay for the funeral. ”In most cases it will probably be a couple of months after the deceased’s death that you can hope for a grant of probate from the court,” says Accredited Specialist in Succession Law, Bryan Mitchell. ”Then you can deal with the transfer of assets into the names of beneficiaries.”

Camilla said, ”We were in the position where we knew Mum was going to die so we transferred money out [prior to her death] to cover the funeral costs. There were no religious speakers because she wasn’t religious and we had a nice wake, which is what mum requested. It cost about $15,000. If we didn’t have the money there we would have been really caught out. . . You also need to keep money aside to pay for phone bills and utilities. [The bank] said I would have access to her accounts for that until probate went through.”

At Estate Battles we like to help people be financially prepared for death, for the sake of those who live on after your death. Your plans won’t mean much to you when you’re gone, but will mean the world to your loved ones. We can help with all of your estate planning needs. Please contact us today for a free, 10-minute phone consultation with one of our estate lawyers.