Could You Spot A Fraudulent Will? 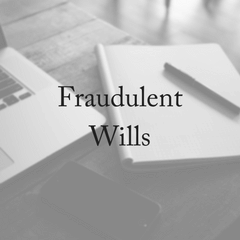 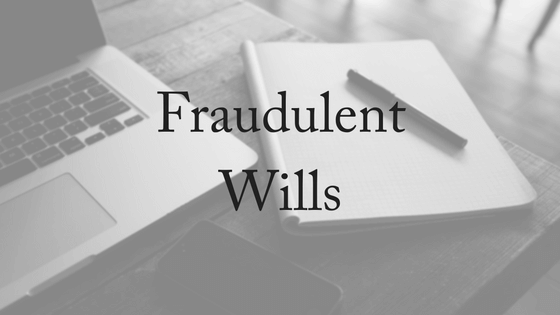 Would you be able to spot a fraudulent will? Having a valid will helps to ensure that your wishes for your estate are carried out when you die.  Unfortunately, the rise of the fraudulent will means that some families are left in great turmoil, assets are lost and fraudsters are getting away with, well, fraud.

Fraudulent Will: as Grounds for Contesting a Will

There are various grounds on which a will may be contested or challenged.  If a will doesn’t make sense or the meaning is unclear then that can be grounds for a will challenge. A will may also be contested if the person preparing the will benefits from it, or a more recent will has revisions that bear no similarity to previous ones.  The other big reason is the questionable validity of a will and how that will may have come into existence. Although there can be various reasons for challenging the validity of a will, fraud is certainly a legitimate one.

[Tweet “You have grounds for challenging a will if fraud is suspected.”]

Warning Signs of a Fraudulent Will

The death bed will. A sudden change to a will when the will-maker is at their most vulnerable is suspicious, particularly when there is a large departure from previous wills. The key is to look at who will benefit from the new will.

Sudden exclusion of family members. A spouse or children suddenly cut out of a will raises concerns. It could be that one family member is exerting undue influence, or that a friend or neighbour is trying to get themselves written into the will.

Sudden inclusion of a new person. The sudden appearance of a friend, neighbour or even new love interest should be considered suspicious. It’s no uncommon for unscrupulous people to prey on vulnerable older people with the sole purpose of obtaining something from the will.

The will benefits professionals over family members. A will which favours a health care worker, caregiver, lawyer, accountant, handyman or doctor over family members should be treated with caution. Sadly, even those in positions of trust can abuse their power by influencing an older person to change their will.

Assets are missing or parts of the estate are unaccounted for. It is immediately suspicious if a will does not accurately reflect the assets an older person owns, or where assets have gone missing and nobody knows what’s happened to them.

The older person is suffering from cognitive decline. A dementia sufferer is at a higher risk of being financially exploited. It is not uncommon for a dementia sufferer to agree to marriage, because the act of marriage revokes all previous wills.

Taking Advantage of the Vulnerable

There is a trial continuing in Sydney over a fraud case involving a woman who denies taking advantage of an elderly dementia sufferer.  Victoria Anne Adams has denied making a fraudulent will for a woman she claims she ‘basically became the next of kin’ for. The crown alleges Adams conspired with other people between 2005 and 2011 to defraud Ms Pearson’s relatives. Ms Adams refutes the claims and has pleaded not guilty to plotting with others to cheat and defraud the beneficiaries of the estate of Ms Edna Pearson.

Ms Pearson died in 2008 at the age of 82.  Ms Adams was said to be heavily involved in looking after the elderly lady and for three care workers who made numerous visits to Ms Pearson said that Ms Adams was their main point of contact.  One woman has testified that she saw a copy of Ms Pearson’s will and that Victoria Adams was named in it. 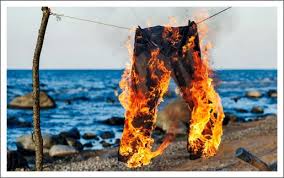 Suspected fraud can sometimes be hard to determine as real, falsely accused or imagined. Not so in the case against Donald ‘Rusty’ Arsenault.  This man forged his murdered wife’s will to cut out her sons and leave him everything, according to Judge Susan Longley.  Arsenault was marrried to Lynn Day Arsenault for 10 years before she was shot to death in 2013 by a man who was trying to kill one of her sons. In the altercation she was shot in the chest while trying to protect her son.

[Tweet “A fraudulent will can sometimes be hard to determine as real or false.”]

After her death, her sons were stunned that Rusty revealed a will that left everything to him.  ‘When we first saw it, we were very shocked,’ Nick Day said. ‘We knew it would never have been my mom’s wish to have her family left with nothing. She always was very, very generous and caring and helpful. This would have been outside of her character to do something like that.’

In a two day trial with the probate judge, it was agreed that not everything was as it should be. Judge Susan Longley agreed that something was fishy, and after hearing testimony from a handwriting expert, agreed that the will was fraudulent and the signature was forged. ‘By this will, the Decedent left 100 percent to the surviving spouse. Though by all her other actions, she insisted on protecting and providing for sons, in the purported will, she did not include or mention her beloved sons in any way,’ wrote the judge.

Under Maine’s state laws it’s unclear as to whether a crime was actually committed because the will was considered unsuccessful.  One of the son’s attorneys did suggest that they do report the matter to the appropriate authorities.

What Makes a Will Valid?

For a will to be considered valid there are certain conditions that need to have been met.  The different Australian states are all quite similar in their requirements.  These following elements 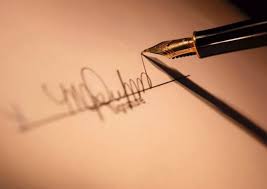 constitute the making of a legal will:

If you suspect a fraudulent will has been made, then you may have grounds for challenging that will.  Our estate lawyers are experienced in handling will challenges and would be happy to offer you a free, 10-minute phone consultation. Please contact us today!