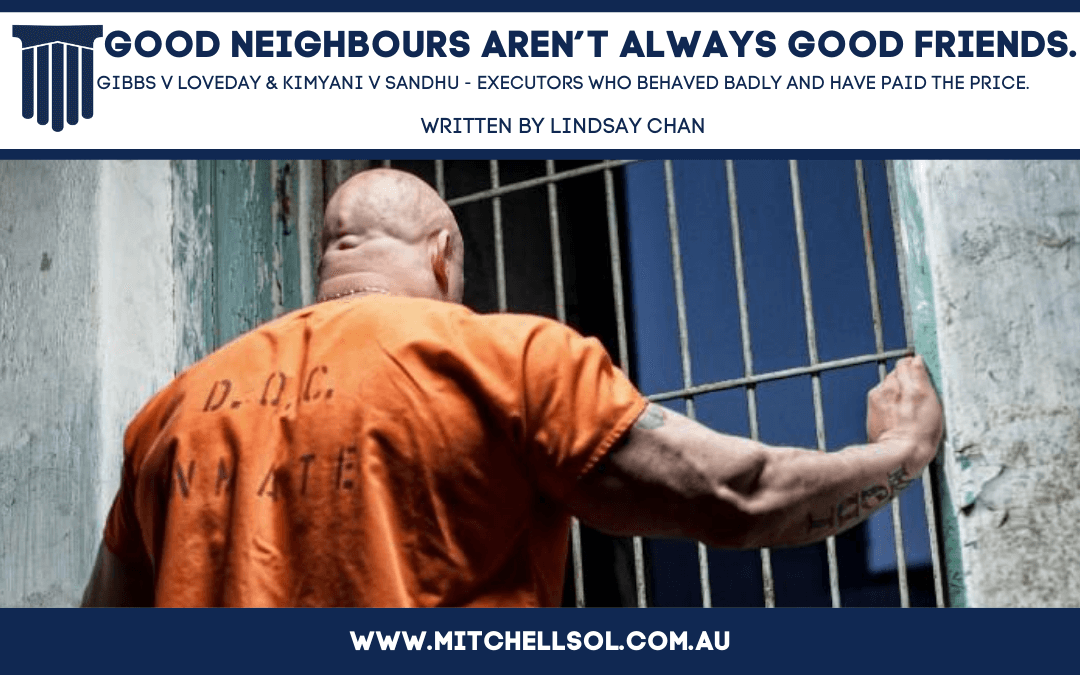 There’s an old Chinese proverb that says a good neighbour is a priceless treasure, a saying that Anita Border took to heart when it came to deciding who was to be the executor of her will. David Loveday was not only described by her as a trusted neighbour but he was also the partner of one of Anita’s friends, Emma Cullen, who was one of two beneficiaries named in her will;  perfectly placed to ensure the safe delivery of the estate.

Having tired of repeatedly asking for an explanation as to the whereabouts of her money, two years after the sale of Anita’s  property, Parminder launched an investigation and made an application to the court in 2017 to demand an explanation as to where her money was and to remove David Loveday as the executor of the estate.

During the hearing, the English High Court (a Supreme Court in Australia would probably be its equivalent) heard that Loveday had repeatedly lied to Parminder Gibbs and failed to account for where her money had gone. It quickly became apparent that Loveday had used money from the estate on a new car, holidays and towards clearing his own debts.

Loveday was removed as an executor, found to be in contempt of court and in the Judge’s words was “personally culpable” for failing to properly control the assets of Anita Border’s estate. A court order demanded that Loveday provide bank records in relation to payments out of the estate, which was disregarded by Loveday and he was then sentenced to six months in jail.

There were numerous delays in trying to trace the missing money, mostly down to David Loveday’s insistence that the money was being kept safe in an ISA but failing to provide any evidence of the account. Finally, in 2019 Loveday admitted fraud by abuse of position and his sentence was extended for a further three years and seven months.

In sentencing, Judge Brendan Finucane QC stated that Lovedays actions were “ an abuse of a position of trust over a prolonged and sustained period of time”.

The court’s action towards David Loveday for his abuse of trust that Anita Border placed in him goes some way in providing comfort to the testator, knowing that any misuse of your funds by dishonest Executors won’t go unpunished. The real victim in this case, though is Parminder Gibbs who has not only lost her share of the estate but has also spent considerable personal savings on court fees to bring Loveday to justice. Money spent which will never be recovered.

If you can’t trust a neighbour to distribute your estate then who can you trust?

Figures released in July 2014 by the English High Court show that claims against Executors who have mishandled a deceased’s estate have trebled in the year prior, rising from 107 in 2012 to 368 in 2013. These claims include allegations of theft on the part of an executor, negligent (careless) incorrect distributions being made or deliberately wrongful distributions by them.  It would not be surprising if similar trends existed in Australia.

Unfortunately, not even members of your family can be relied upon when it comes to the safe distribution of your estate.

In the case of Kimyani & Ors v Sandhu, a daughter was committed to prison for 12 months following an application from her sisters to remove her as administrator for their mother’s will.

Davinder Sandhu obtained letters of administration for her mother’s estate in 2009 and a year later her sisters issued proceedings to remove her as administrator and to provide details and evidence of the estate administration. What followed was a number of court hearings, asset freezing orders and a refusal of Ms Sandhu to provide financial disclosure or comply with court orders.

At a 6 April 2017 hearing, the court ordered Ms Sandhu to disclose information about her assets and about transactions she had entered into. She was ordered to do this by 11 April 2017 and follow this up with affidavit evidence by 18 April 2017. Ms Sandhu missed both deadlines. Ten days after the 11 April 2017 deadline, the sisters commenced ‘committal proceedings’ to have Ms Sandhu imprisoned for non-compliance with the court’s order.

Case law from the English Court of Appeal holds that breaching disclosure orders in the context of a freezing injunction normally merits a prison sentence. Accordingly, the court ordered that Ms Sandhu immediately be taken into custody and jailed for 12 months.

It’s clear from the above that although the English courts will provide Executors with the opportunity to solve any problems that arise between them and the beneficiaries, they won’t tolerate badly behaving executors who disregard their responsibilities. However, a commital to prison doesn’t recompense the beneficiary who still hasn’t received the money from the estate intended for them and has instead spent their own savings on seeking an order from the court.

In order to avoid leaving beneficiaries in a worse financial position because of a will, every will maker needs to be encouraged to think carefully about who they name as Executors. It’s always best to seek specialist advice on such matters.