How a simple will led to an estate battle 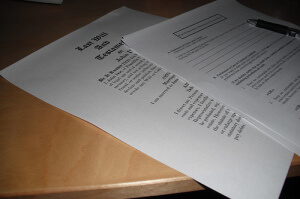 A recent case that reached the Supreme Court in the United Kingdom has highlighted the need for obtaining quality and specialist estate planning advice.

Mr and Mrs Rawlings made wills before their deaths, which left everything to each other, which is commonplace for married couples. In the event that the other had already passed away, the entire estate was left to Mr Rawling’s stepson, Terry Marley. They made no provision for their own two sons in their wills.

Unfortunately, an error was made in that Mr and Mrs Rawlings signed each other’s wills instead of their own. This oversight wasn’t discovered until both had died.

Their sons contested the will, claiming that it was invalid, and that they should inheirit the estate under intestacy (or as if they had died with no will) laws. Marley, who undoubtedly had a negligence claim against the solicitor, was required by the solicitor’s insurers to bring proceedings to seek to have the will upheld as valid.

The trial judge and Court of Appeal found that there was no document which constituted a will, and that Mr and Mrs Rawlings had died intestate (or without a valid will). Accordingly, the estate would pass to all his children, despite the fact that this was clearly not what the deceased intended.

However, the Supreme Court found that the document Mr Rawlings had signed was clearly intended to be his wishes and that it satisfied the formal requirements of a will. As a result, Marley received the entire estate and the two sons received nothing.

The decision of the UK Supreme Court is not binding on Australian courts, but it is an interesting case study in how even the most simple wills can end up in a ferocious estate battle. In the state of Queensland, there are also laws which make provision for certain family members under a will.

Even if you think you have simple estate planning needs, you should seek the advice of an expert in this area of the law so that all scenarios can be considered – and to ensure that simple errors aren’t made.

We offer a free 10-minute phone consultation with Accredited Specialist in estate planning, Bryan Mitchell. Phone or email us today!