Is An Unequal Inheritance Fair? 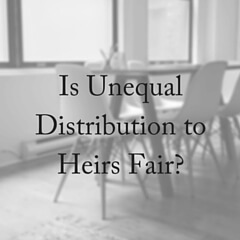 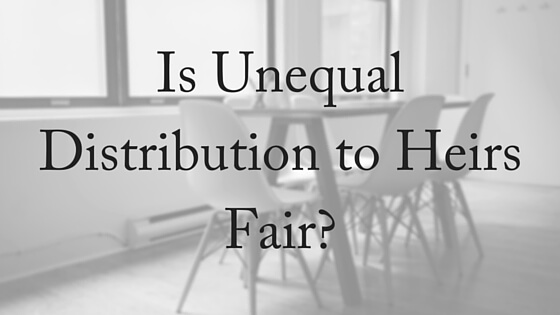 There are sometimes good reasons to give heirs an unequal inheritance.

Often in estate planning division of assets among heirs is fairly equal.  More and more though we are seeing unequal distribution of estates and mostly where there are situations in which parents have good reason.

One example of this would be if you have children from a first marriage and you want to keep assets amassed before your second marriage for those children (and not subsequent heirs). Sometimes there is a child who may have a greater need for money than other children.  Because it can be such an emotional situation and cause angst and division in families it’s essential that advisers take the emotion out of situations and rationally and logically help parents to have their desires met in a way that is likely to be held up in court.

[Tweet “If you are thinking of leaving an unequal inheritance, seek legal advice.”]

The wishes of the parents need to be explicitly stated in writing.  This way desires are clear and there is no room for interpretation otherwise.  Your estate plan can be revised at any stage – they do not have to be set in stone.  Circumstances and family relationships can change.  Decisions that may have been made when emotions were raw can be revised at a later date to reflect the current state of affairs.  A black sheep can sometimes be reconciled to the family. 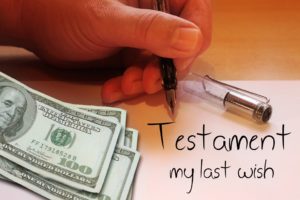 People generally don’t like surprises, so communicating your plans to your heirs is an essential part of the estate planning process if you’re hoping for relationships to remain intact down the track. Being open and discussing your decisions and reasoning with family can make the process much more peaceful.  Unequal inheritance of an estate doesn’t have to be unpleasant. Estate litigation is less likely when there is no big surprise.

In the case of one family, two daughters are being treated differently to account for the learning disabilities of one and the successful career of another.  Both daughters met with the parents where the rationale for their decision was explained.  The self-sufficient daughter (who will receive less) was given the opportunity to appreciate the decision and was persuaded by the idea.  What may have become a divisive issue is avoided with open communication and understanding.

Sometimes parents play favourites and this might be to reward one child for something or to punish another.  Giving your children an unequal inheritance can be a bit like playing with fire, but there are ways that the fire can be kept under control so that it doesn’t become a raging inferno.

Creating incentives is one reason parents proceed this way.  Sometimes a family may have a child who is abusing drugs or alcohol and there may be a trustee that is prohibited from giving the child money until they are sober. So it may not be that they are allocated less money, but have a gatekeeper to help them use it wisely.

[Tweet “Sometimes an unequal inheritance is the best for every beneficiary of the will.”]

There may be a child who has ongoing physical or psychological issues, so parents may leave more money for their care.  Patricia Maisano whose firm often advises in cases such as this said that she had one case where one of the sons suffered a severe head injury in a car accident as an adult, rendering him unable to care for himself. Prior to the accident, he was a biochemist. After the injury, his parents switched their estate around so the bulk of the estate would go toward his care after they were gone. The man’s brother didn’t mind he was getting less, because he could see how much care his brother needed.

In situations like this, an unequal inheritance is necessary.

A level playing field is often desired by parents for all their children and so they may give more money to one child to create this. It may be that one child has a lucrative business that makes them millions of dollars and another child does not work and is married to a school teacher.  Mickey Segal, who is a partner of a business management firm says that when he does see it happen that “in most cases, I have found that where you see a huge disparity in distribution—usually with the much bigger estates—that even with the disparity, everyone gets enough to be OK.”

But not always.  Even though parents may feel that they’re trying to be fair, there is often someone who feels like they’re getting more harshly treated.

While parents can decide to do whatever they want, experts recommend against leaving one child nothing at all.  Children have the right under the law to make a claim against the estate if they receive an unequal inheritance that they feel is unfair.

When it comes to estate planning, its a time when parents think hard about each child’s needs and what has been done for them already. Real life is not always a happy story and so our wills may reflect this. Although for many families treating all children equally is the better choice, it’s not always prudent in the circumstances and your estate plan will need to take that into account. Here are some reasons an unequal inheritance is the wisest choice:

Estate planning can be tricky if you try and do it by yourself, but by seeking the counsel of professionals you ensure that your wishes are clear and can be followed.  For a free, 10-minute phone consultation with one of our estate lawyers, please contact us today!