Is Your Ex-Spouse Entitled To Make A Claim On Your Estate? Ryan v Harrison [2020] QSC 267 and the ex wife who thought she could. 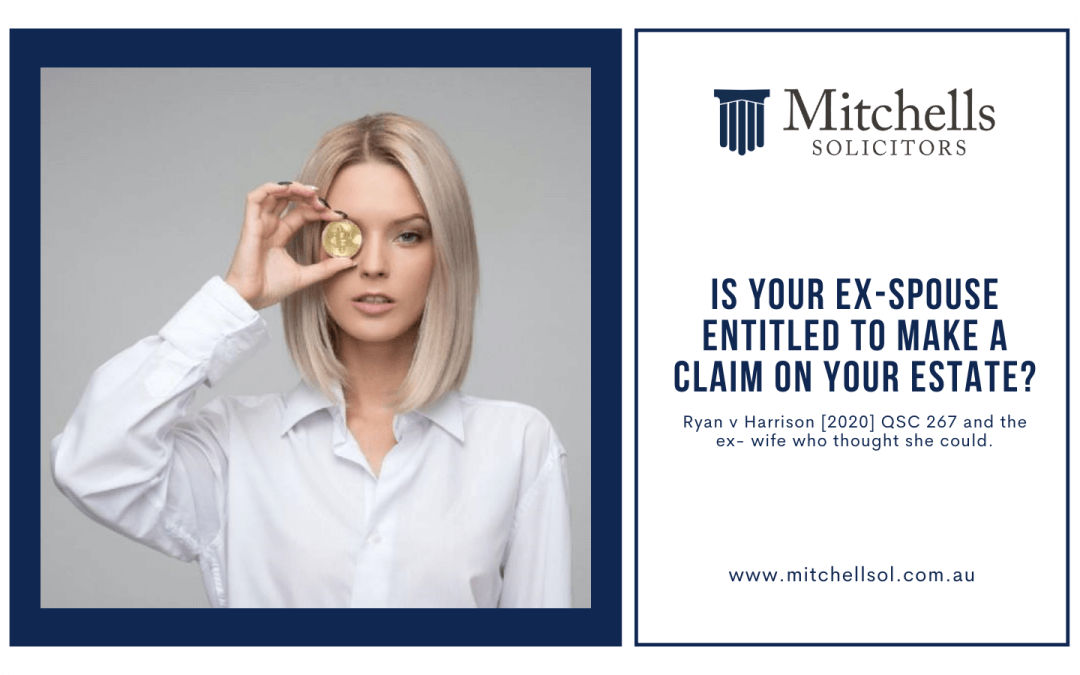 Is Your Ex-Spouse Entitled To Make A Claim On Your Estate?

26 years before his death, Brian Harrison got divorced to Therese Ryan, and just like in 1000’s of other divorces before and since, proceedings were issued and a Family Court order was made which detailed the financial arrangements as follows:

As time progressed, Siobahn started school and the requirement for maintenance to be paid ended. But then when Brian died 26 years later, Therese Ryan made a claim on his estate despite the fact that Brian had remarried and they had been apart for over 26 years.

Part 4 of the Succession Act provides a means by which persons who come within defined categories may seek orders for provision from the estate of a deceased person and a spouse is one of those categories. Although Therese was clearly not Brian’s spouse at the time of his death, she sought to rely on the definition of spouse within the act which expands the word ‘spouse’ to include

A “dependant former wife” of a deceased person. A person who was, on the deceased’s death, receiving, or entitled to receive, maintenance from the deceased.

Therese wasn’t receiving maintenance from Brian at the time of his death, because under the Settlement Order in 1992 ,which was in full and final settlement, maintenance stopped when Siobhan started school. Therese, however, intended to rely on the words ‘entitled to receive maintenance’ and set out to prove why.

In a sealed affidavit, Therese made numerous allegations against Brian. Her affidavit contained numerous episodes of mistreatment and violence which she said had made her fearful of Brian and had prevented her from making a claim for maintenance whilst Brian was still alive. She maintained that she had intended to bring a claim for maintenance in 2018 but was unable to do so because of her health, stating that her treating psychiatrist had advised her not to bring applications.

Therese also wanted to rely on the clause of the Settlement which says that either party has the right to seek a further order for maintenance by giving 14 days notice and she would like to make that application now, following Brian’s death.

In addition, Therese also alleged that there were times when Brian had paid money to her outside the terms of the Family Court Order and the amounts and times of these payments depended on her financial needs at the time.

But was she really entitled to be treated as a spouse under the Succession Act?

This question has already been considered on a number of occasions. In Re : Lack it was held that ‘entitlement’ was an entitlement enforceable by a contract or a court order and in Krause v Sinclair, the judge held that an entitlement to something ordinarily involves an established claim as opposed to merely an asserted or alleged one.

It’s clear that Therese wasn’t receiving maintenance payments at the time of Brian’s death and there was no other contract in place between Brian and Therese in relation to payments being made. On that basis, Therese would not be included in the definition of spouse.

Therese’s affidavit didn’t assist her either because even if Therese had made an application for maintenance in 1981 as she states she intended to do, the mere making of an application still wouldn’t have brought her within the definition of Spouse within the Succession Act. The liberty to apply clause in the Settlement Agreement wasn’t even deemed worthy of consideration by the court as it falls within the exclusion from the meaning of “entitled to receive”

The court ruled that Therese Ryan was not a person entitled to bring an application under Part 4 of the Succession Act and her application must be dismissed.

On the other hand,  if you’re an ex-spouse currently receiving money from your ex then consider cementing those ad hoc maintenance payments you’re receiving into a contract to ensure your entitlement is secured, After all, a spouse only lasts the length of a marriage but an ex-spouse could stay with your estate forever.