Leaving Your Success Story To The Next Generation (And Their Spouses). Aronis v Aronis [2022 ] QSC 39 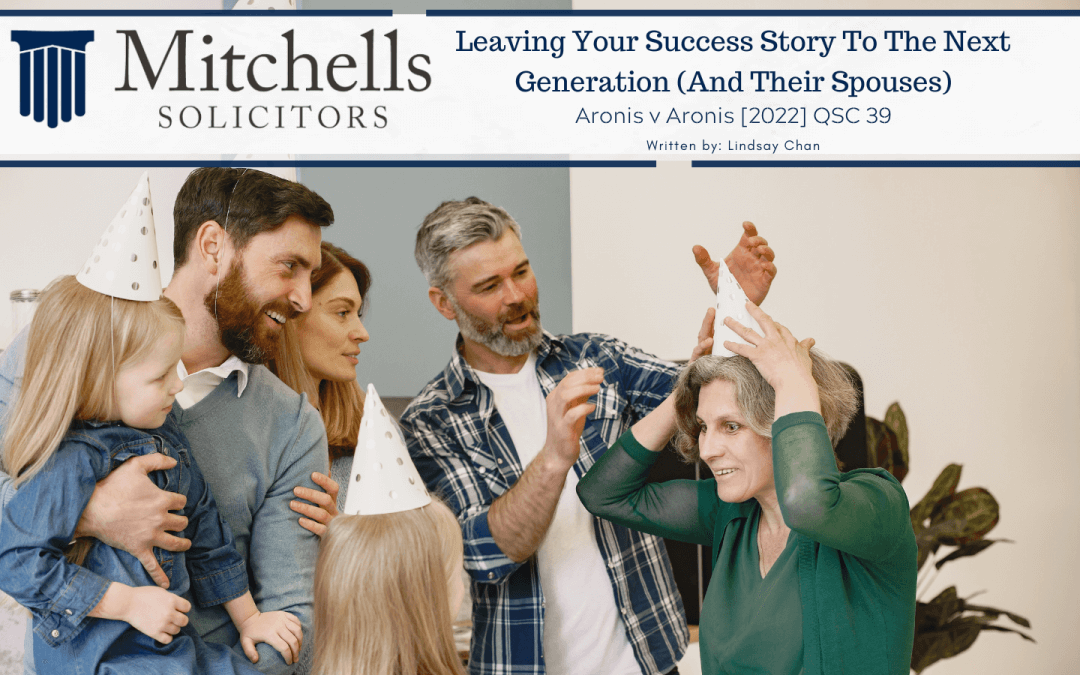 Leaving Your Success Story To The Next Generation (And Their Spouses)

Meet the Aronis family, the very definition of a success story. George and Maria emigrated to Australia in 1959 along with their son Paul and their daughter Matty and purchased a small corner shop with a flat above to live in and where Matty worked when she was not in school.

By the early 1970’s the Aronis family empire had grown considerably enabling George and Maria to stop working. The Aronis family now owned a large number of assets including three local Fish and Chip stores and several rental and commercial buildings. The two Aronis children had other jobs but still continued to work in the family business on evenings and weekends until the mid 70’s when Paul retired from the QLD police force and worked for the family business full time managing the previous rental properties along with new properties the Aronis family continued to buy.

In 1984 George and Maria began to think about what would happen to the family dynasty when they died and made mirror wills appointing each other as the executor and if they were both to die, to their children Matty and Paul in equal shares. Then in a further will in 1991 Maria made a further will appointing her son Peter and his wife Theodora as executors and leaving all her estate to them.

George died in 1993 and Peter died in 2015 leaving the Aronis matriarch, her daughter and daughter in law embroiled in conflict around the two younger Aronis’ entitlement to the family empire.

The first legal move was made by the daughter in law Theodora who alleged that her husband Peter was the beneficial owner of five of the Aronis properties under an understanding in the late 1970’s and that any income derived by the properties were the property of Peter and more importantly his estate and not the Aronis family. She maintained that as a result of this understanding Peter had managed the properties for no salary, cleaning and maintaining the properties and paying George and Maria’s private expenses.

Both Maria and her daughter Matty denied these allegations. Matty pointed to her parents’ 1984 will that left all property in the family to her and Peter in equal shares and confirmed that she too had made a number of financial contributions to the properties, including loan repayments, on a number of the properties.

Maria died shortly after the claim was filed but not before filing an affidavit with the court confirming that the alleged conversation Theodora referred to never took place and changing her will to leave her whole estate to her daughter Matty.

Whilst the trial was ongoing, Matty made a separate application to the court to remove the caveats Theodora had asked to be placed on the seven properties contained in Maria’s will as she needed the income from these properties in order to financially be able to fight these allegations. The Judge allowed the caveats to be removed and Matty was then able to make five counter claims against Theodora in respect of rental income on properties that she believed had not been paid into the Aronis family assets by her brother and his wife.

The Judge rejected Theodora’s claim on the basis that Theodora had not proved on the balance of the probabilities that the alleged conversations and understanding had ever existed and in a double victory for Matty also entered judgement in her favour on the properties leaving Theodora liable for $211k of wrongly appropriated rents.

Matty, the one surviving Aronis, is now the sole beneficiary of the family empire.

But at what cost?

It’s hoped that the Aronis family business will continue to thrive but the estate will have been reduced significantly with the legal costs involved and Matty and her mother were made aware of significant siphoning off of money by other family members leaving a business with it’s roots in family involvement without some family members.

Estate planning comes with the responsibility to seek professional advice from a wills expert who has the experience to forsee the possible problems that may occur when a family business forms part of the estate. You’ve worked hard for your legacy. Don’t let the absence of the right advice, dilute it.