Living Will: A Positive Voice On Death 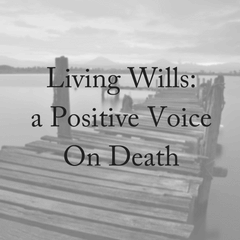 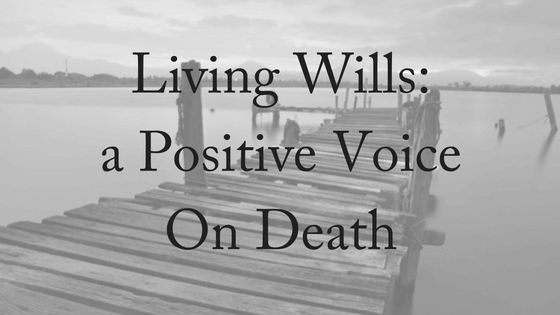 A living will (also known as an advance health directive) is not something that many people get excited about – it really doesn’t make for pleasant dinner table conversation. But we should.  It’s a chance to choose when sometimes we feel as though we don’t have much power. Being prepared for death and the health questions of ‘what if?’ mean that our families will not be left with painful decisions that may cause massive angst and conflict. A living will gives you peace of mind that your wishes will be followed even if you’re unconscious or unable to communicate.

A Living Will: The Town That Talks About Death

There’s a town in Wisconsin called La Crosse.  It’s an unusual town because one of their usual conversations is about death. While a lot of the rest of the western world doesn’t like to talk about death, in La Crosse it’s become the norm. In the US, only about 30% of adults have a living will.  In La Crosse, approximately 96% of the people who die there have an advance health directive or other, similar documentation which outlines how they want to die.

It’s not a town with the usual gossip, either.  The neighbours here discuss who hasn’t filled out their advance health directive. This town has become comfortable with these types of conversations because of medical ethicist Bud Hammes, who works at a local hospital.  Bud said that for years, he was called when someone’s dad had a stroke, was in a coma, or being kept alive on life-support machines. Bud would sit down with the family and try to help them figure out what to do next. And every time, he says, the discussion was excruciating. “The moral distress that these families were suffering was palpable,” he says. “You could feel it in the room.” Most of the time, Bud says, they’d be talking about a patient who had been sick for years but had never discussed their wishes with their families and did not have a living will.

.[Tweet “One in four people lose the ability to make decisions about healthcare at the end of their lives.”]

Bud decided to do something about it and trained nurses to ask questions ahead of time about whether they’d like to fill out an advance health directive. Although the idea took a while to catch 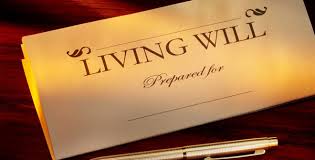 on, the results speak for themselves. One of the unintended benefits of having these conversations and the resulting decisions of patients was the reduction in health care costs.  When patients were asked the question: “If you reach a point where treatments will extend your life by a few months and side effects are pretty serious, would you want doctors to stop, or continue to do all that could be done?” And a lot of patients said: Stop.  Because their desire was for treatment to stop, the cost of treatment also stopped. But unless these wishes were made known, family members wouldn’t know what to do – and would often continue treatment.

All Kim Pritchard wanted to do was pay a bill for her dad, but because she was not designated as his power of attorney, the company would not let her change his financial information. “My dad has a form of dementia,” said his daughter, Kim Pritchard. “Some days he remembers everything. Then the next day he might think his mom is still alive.” Ray is unable to make decisions for himself any longer because of his declining mental capacity.

Declining mental capacity is a common problem. As baby boomers get older, their brains aren’t keeping up with their fiscal nature. It’s going to be a problem for a long, long time. There are more than 353,800 Australians living with dementia. This number is expected to increase to 400,000 in less than five years.Without a medical breakthrough, the number of people with dementia is expected to be almost 900,000 by 2050. Without careful planning, this is a lot of people who will no longer be able to make decisions for themselves.

Families can save themselves a lot of headaches by planning ahead, and appointing one or more persons to act on their behalf, with a power of attorney for financial decisions, and an advance health directive for health decisions. In Kim Pritchard’s case, because there was not one in place, it took a month and several thousand dollars for the family to have someone designated as a caretaker for her father.

What is an Advance Health Directive and Why Have One? 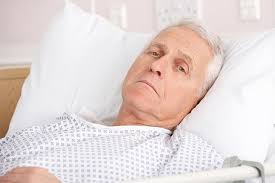 The law permits people with capacity to give a detailed and formal written direction to doctors, other health professionals and/or family as to what medical treatment they are agreeable to and what treatment they clearly do not want.

If you lose capacity, need medical treatment and can’t communicate about it, an Advance Health Directive (also known as a living will), completed and signed in the presence of your doctor, solves this problem. It allows you to control your final days and gives you and your family peace of mind that your decisions for end-of-life care are followed.

[Tweet “An Advance Health Directive allows you to control your final days.”]

Dr Annette Street, an adjunct professor of palliative care at La Trobe University and lead author of a government-funded study on living wills, said that the documents “are not just a vehicle for people to leave instructions that would lead to their death. Instead, they are directed at quality of life near the end so that undesired and unwarranted treatments are not initiated and values and religious or cultural preferences are respected”. Street says about one in four people lose the ability to make decisions about healthcare at the end of their lives.

Unfortunately, there are many Australians who do not have a living will – or estate planning of any kind. Ken Hillman, a Professor of Intensive Care at the University of NSW and Director of The Simpson Centre for Health Services Research says, “I work in intensive care and have never seen a patient with an advance directive. However, we almost always comply with the patient’s wishes or their closest relative’s wishes with regard to limiting treatment.”

To ensure that your end-of-life wishes are met it’s best to fill out an Advance Health Directive. It is important to have a professional help guide you through the document so that you don’t miss anything and it is a vital part of any estate planning service.  Our estate lawyers are experienced in advising on these matters.  Please contact us today for a free, 10-minute phone consultation.