The Millionaire Who Gave Away His Fortune 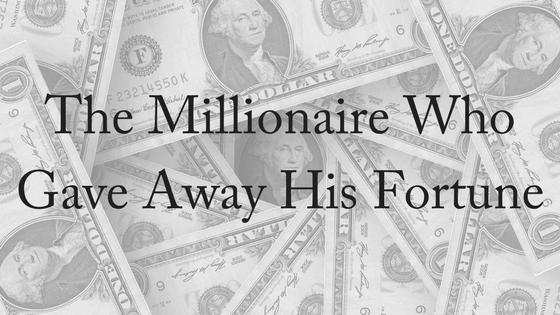 Is £160 million enough of a fortune for a family to fight over? Sir Jack Hayward died at the age of 91, after a lifetime of philanthropy and generosity. But his own children felt he gave too much of his fortune away, to such an extent that he believed they wanted him dead. He spent some of his final years removing names from family trusts and fighting bitter legal disputes with his children and grandchildren.

His children accused him of wasting their inheritance and acting irrationally. Sir Hayward countered by saying he had given his children the finest education, buying them properties and arranging gifts of over £1 million for each of his grandchildren and that the remaining money was his to do with what he wished.

In 2010, he told the Daily Mail: “To say that my children are a disappointment to me would be the understatement of the century. Why don’t they go and get a good job instead of lusting after me and my trusts? I feel betrayed, disgusted and puzzled by what they are doing – but if they want a fight then, by God, they’ve got one.”

Hayward worked with his father to build up an engineering firm and property developments in the Bahamas. He became rich in his 30’s, and uninterested in buying yachts or private jets, began to seek out good causes into which to put his money.

He donated £1 million to rebuild the hospital in the Falkland Islands after the war, and another £1 million to help British widows and orphans.

But it was his decision to sell his beloved football team, the Wolverhampton Wanderers for £10 to a construction millionaire who promised to invest £30 million into the club that caused the biggest rift in the family. Jack’s three children all owned an interest in their club and felt that he should have sold the club for a fair market value, estimated to be £20 million. But Jack insists that he didn’t want his beloved club to fall into the hands of those he termed “asset strippers and city slickers.”

When his children learned of his plans to sell the club for £10, they were furious and would not sign the club away. Sir Jack says that they used extortion to allow him to sell the club by signing over various other assets to them.

He had to sign over two properties – Lydhurst Estate in Sussex and Dunmaglas Estate in Scotland – to his children before they would sign for the sale of the club. The properties are thought to be worth about £35 million and his children would have inherited them anyway.

Before his death, Sir Jack announced that his stake in the Grand Bahama Port Authority, worth about £80 million, would be left to charity and not his children. He also removed his children from family trusts.

His children challenged those decisions in court, accusing him of frittering away their inheritance. Two of his children, Rick and Susan and six of his grandchildren sued him for $100 million for removing them from the family trusts. The ‘battle for control’ over Sir Jack’s estate has pitted his son, Rick, his siblings and their children against Patty Bloom, Sir Jack’s long-time partner and her children.

He passed away in Florida, at the age of 91, in January 2015 and the litigation over his fortune continues.

Dealing With Your Fortune

You may not be a multi-millionaire, but here in Queensland, it’s important to know that will makers have an obligation to provide for their family fairly. The term family includes spouses, children, step-children and anyone who might be dependent on them.

If family is not fairly provided for in a will, they can make a claim against the estate, known as a Family Provision Claim.  They must prove in their application that the will did not provide for their proper maintenance and support.

Of course, even though a person has a right to bring a Family Provision Application to court, it doesn’t necessarily mean that they’ll win.

When thinking about whether to challenge a will, it’s important you receive specialist advice. Contact us today for a free 10-minute consultation. If you are worried about an estate battle or do not know how to distribute your estate, seek legal advice. Or if you feel that you’ve been left out of a will, it’s important to obtain legal advice as quickly as possible as strict time limits apply.