Picasso’s granddaughter to give away inheritance 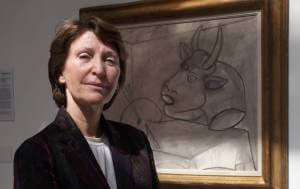 Marina Picasso may bear the famous name of her grandfather, but the legacy he passed onto his family has been a burden to her.

She was in her 20’s when she inherited the famous artist’s French villa and thousands of his works, including paintings, etchings, ceramics, and sculptures. But she turned the paintings to face the walls in resentment of the grandfather who caused their family much pain. At the time of his death in 1973, Pablo Picasso left behind four children, eight grandchildren and wives and muses, all of whom became tangled in a bitter dispute over his estate. Picasso died at the age of 91 with no will, triggering the dispute.

Marina Picasso was named an heir and given one-fifth of the estate, including the French villa. But it’s an inheritance without love, she says.

She has been selling her grandfather’s work ever since to support herself and her charities. She is well known for her philanthropy, giving away millions to pediatric hospitals and facilities for troubled youth.

Marina Picasso’s resentment of her grandfather is fostered by memories of her father, begging Pablo Picasso for handouts and living on the edge of poverty for much of her childhood. When her parents divorced, she rarely saw her father and never saw her famous grandfather. She became estranged from the remainder of the family after her brother was barred from attending Pablo’s funeral. He committed suicide several days later.

“I live now in the present,” Marina says. “The past rests in the past. But I will never forget, never. I respect my grandfather and his stature as an artist. I was his grandchild and his heir, but never the grandchild of his heart.”

Perhaps Picasso didn’t care that his family fought bitterly over his estate after he died, or perhaps he thought he had amassed enough wealth to go around. However, no matter who you are, dying without a will can cause chaos and angst for your family.

American financial expert Suze Orman says: “Estate planning is an important and everlasting gift you can give to your family.”

We agree – and we specialise in estate planning. So if you need assistance with a will, whether it’s writing one or because you’ve been left out of one, we’re here to help. Call us today for your free 10-minute consultation!