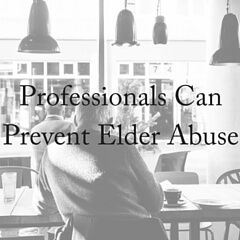 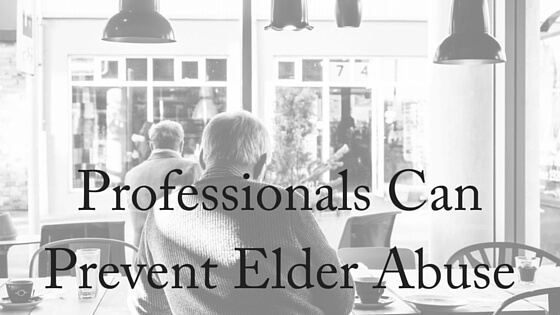 What is Elder Abuse?

Elder abuse is the abuse or mistreatment of older people, which can take the form of sexual or emotional abuse, physical violence and financial manipulation. It affects at least 10 percent of older Americans and 5-6% of Australians over 65.  Elder abuse can happen to those residing in nursing homes or those who are living with family members.  Sadly, those who are living with a spouse or adult children are more vulnerable – these are the two groups statistically most likely to be abusers.

Long term harm or even death can be the result of elder abuse if it remains undetected and there is no intervention.  Those who are abused have an increased chance of physical and mental illness, leaving them even more vulnerable and at risk.

Because the abuse can appear in many forms and the issues involved are complex,  there is no band-aid fix or single, simple solution. But some research shows that multidisciplinary strategies can be most effective. Primary care may come from a doctor who treats them for physical harm then realises that some help is needed from the victim’s bank because a family member is restricting their money and financially abusing them.

[Tweet “Doctors are often the first line of defense in preventing elder abuse.”]

Nobody can fix elder abuse by themselves, but doctors are often an important first line of defense. Their ability to sensitively engage with older people and detect abuse, along with being familiar with community resources to help them, are key components in helping victims. 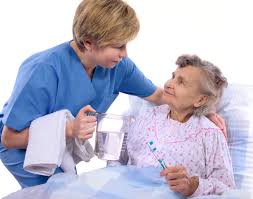 In Australia, aged care staff say their industry is facing a crisis, with claims of abuse and neglect as patients struggle to get even basic care. There can be frequent medication mistakes, no time to properly feed or toilet residents and medical issues including broken bones and infections that can be left undiagnosed.  According to staff they often wrestle with trying to complete very basic tasks. Mountains of paperwork, registered nurses having to oversee carers looking after more than 100 patients and doctors that can sometimes be hard to find, are all part of a system that disadvantages everybody – staff and patients alike.

Lynette Dickens, a specialist palliative care nurse with more than 20 years’ experience working in aged care, told Lateline of an instance in which an elderly man buzzed for help to go to the toilet but was left waiting for 30 minutes or more. “According to him she [a carer] said ‘you’ve just had a pee, you don’t need to go again’ and he said ‘I do!’ and she abused him and walked outside,” Ms Dickens said. “He kept ringing the buzzer and he said ‘I’m going to wet myself, please help me’, and she grabbed the buzzer and threw it to the end of the bed and said ‘I’ve got better things to do.’

Sometimes residents can have unchanged incontinence pads for hours risking urinary tract and nasty skin infections.  This is because there is no minimum staff-to-patient ratio and occasionally shifts with one carer to 20-30 high-care patients.  Ms Dickens said “In my experience, incontinence pads are rationed, generally three a day, and the rest are stored and locked away in a cupboard and only one person has the key, so anybody wanting extras has to get permission. . . Many residents were saturated from ankle to head, or in bed absolutely drenched in stale brown urine.” And this is just one particular issue.

While there are less medically-qualified staff than before, there is a rise in those needing more complex care. One carer from Victoria says that he locks up dementia patients every night in their rooms, breaking the law.  But there are not enough staff to ensure their safety.

[Tweet “Elder abuse in nursing homes often occurs due to a lack of available staff.”]

One doctor affirms that the system is less about people and more about ticking boxes.  Dr Joachim Sturmberg, a health care academic and GP treating patients in nursing homes says, “Frailty is not well understood – it means the physiological ability to respond to change is very limited and it is the stage before you pass on. [A patient’s health] can be changed by small things, like urinary tract infection which, if not picked up, turns into delirium and can tip over into death.”

The president of the Australian Human Rights Commission, Gillian Triggs, says that it is part of the AHRC’s mandate that all people have access to law and justice.  She spoke at the launch of a program which embeds lawyers within health practices to prevent elder abuse. It is a pilot program which allows victims who are being abused by family members to see a lawyer in the safety of a health practitioner’s office, whether it be a GP, physiotherapist or other.

[Tweet “A pilot program which brings together health practitioners and lawyers is having great success.”] 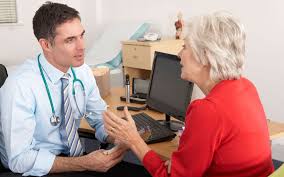 A case was highlighted of an elderly woman, who was the main breadwinner for her family and who had been married to her partner for 25 years when she had a massive stroke. “As a consequence of that, she sees a physiotherapist every month and it became very clear she was experiencing physical, psychological and financial abuse at the hands of her husband,” Triggs said. “But her deteriorating health meant she had to go everywhere with her husband, who accompanied her to medical appointments. She intended to leave her assets to her children in her will, but not her husband. It was arranged for a lawyer to also be present at her appointments so she could get advice about her will during that appointment while her husband remained unknowing in the waiting room. The evidence was so clear she needed assistance, and that this was the only way she could do what she wanted to do with her savings and her superannuation.”

The success of the program shows that similar programs around the country would benefit others being abused. When elder abuse victims are more likely to seek out help from a GP rather than a lawyer, it makes “huge sense to put the lawyer where the problem is likely to emerge.” says Triggs.

We have great experience dealing with elder financial abuse. If you suspect that elder abuse is happening then please contact us today for a free, 10-minute consultation.