Cutting Family Members Out Of A Will 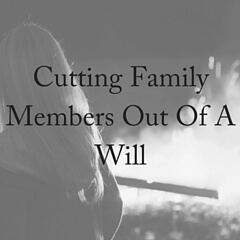 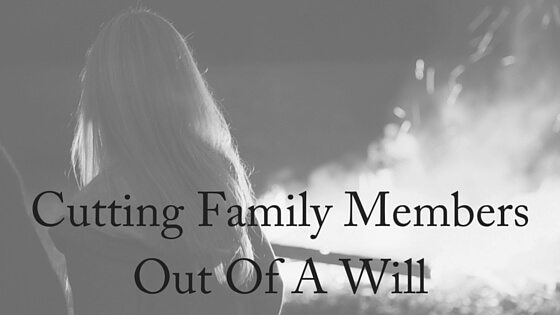 Can you cut family members out of a will?

A particular dilemma often faced by older people in second marriages is how to provide for their partner after they die, while still making sure their children get their inheritance.

This is one of the most common sources of will disputes, and can cause real issues for those left behind.

Just before Stuart Herd’s father died in 1997, he had a conversation with him about his will. His father said that he would leave his estate to his second wife, who he had married nine years previously, and the couple’s assets would then be split between Mr Herd and his wife’s son. 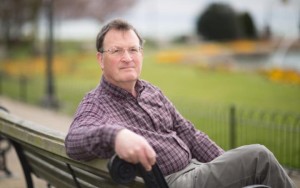 The couple had each drawn up wills leaving their estate to each other shortly after their marriage. After his father’s death, Mr Herd, an accountant from Southend-on-Sea, Essex, says he kept in touch with his stepmother. But unknown to him, in 2008 she changed her will to leave her whole estate to her son and his family – effectively cutting Mr Herd out.

[Tweet “It is common for a step-parent to cut step-children out of their will.”]

She said this was because he had not been in contact with her for ten years – something Mr Herd disputes. He did not find out about the changed will until after her death in 2012.

He wrote to his stepbrother’s family, who had inherited the entire estate, to explain his position – but got nowhere. Under UK law Mr Herd’s stepmother had a right to leave her estate to who she wanted.

Of course, we’d all like to trust that our loved ones will follow our wishes after we die. But it’s impossible to predict how changing circumstances, family fall-outs, or health and financial issues might affect people’s decisions.

One pensioner decided to disinherit his children and grandchildren in favour of an Alzheimer’s charity.

Don Day, an 85‑year‑old former accountant, has decided to disinherit his estranged family and leave all his wealth to the Alzheimer’s Society.

His decision was motivated partly by the help that the charity has given to him and his wife Pat, 84, who has dementia and now lives in a care home, and partly by his lack of contact with his daughter and the fact that his grandchildren are comfortably off.

“I believe that the Alzheimer’s Society is a worthy organisation,” Mr Day said.

Mr Day and his wife fell out with his surviving daughter, now in her 50s, six years ago. The family split came after the death of their elder daughter, Julie, at the age of 50. 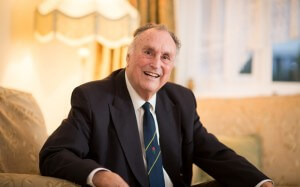 Don Day, an 85-year-old who is leaving his entire estate to charity.
PHOTOGRAPH BY DANIEL JONES 2016

After her death, said Mr Day, his other daughter walked out of the hospital and never came back. She lives in Bahrain with her husband and, although she comes back to Britain regularly, Mr Day hasn’t seen or spoken to her in six years.

[Tweet “Leaving your whole estate to a charity could lead to an estate battle.”]

By leaving all of his money to charity, he is also disinheriting four grandchildren, two from each daughter. He said they were all “comfortably off” and that he hadn’t seen or spoken to his surviving daughter’s sons, now in their 20s, since Julie’s death.

He said their relative wealth had been a factor in his decision to leave them nothing at all in his will.

“I’m not depriving them of anything,” Mr Day said. “If I thought I was depriving them I might leave them something small, but it wouldn’t take away from my ultimate aim to leave my estate to the Alzheimer’s Society.”

His estate consists of the family home in Leigh-on-Sea, Essex, which has been valued at between £700,000 and £750,000, and other assets that bring the value of the estate to almost £1m.

Can You Cut Family Members Out Of Your Will in Australia?

In Sydney, Josephine Di Mauro, a 60-year-old cook in a “modest financial position”, was entitled to claim $100,000 out of her father’s $1.7 million inheritance after nearly 22 years of no contact, the Supreme Court of NSW said in a decision handed down on Tuesday. Josephine had moved out of home in 1991 to marry but her father declined to give her his blessing. She testified that she tried to re-connect with her father over the years on birthdays and at Christmas, but he would hang up on her. In 2004, her father Rosario specifically wrote Josephine out of his will.

Ruling in favour of the daughter, Justice James Stevenson found that even though Josephine had been estranged for nearly 22 years, she was entitled to some of his inheritance.
[Tweet “In Australia, certain family members have the right to inherit from your will.”]
The court found to a certain extent, she “gave up part of [her] life” to care for her father and her brothers, doing most of the cooking, laundry and other domestic duties before and after her mother passed away. However, because of the poor relationship between Josephine and the father, she was awarded only $100,000, about a quarter of what her younger brothers would receive. The younger brothers, the court found, were in constant contact with their father and provided help to him as his health deteriorated in the later years.

In Queensland, a will maker ought to make adequate provision for the following persons:

It is at the discretion of the court as to whether or not an eligible applicant will be further provided for under the Will.  Not every applicant will be successful.  The key is to seek advice from an expert in succession law.

The important thing to remember with a Family Provision claim is that the test is not to establish what the deceased intended under the will.  The court must simply decide whether or not provision ought to be made to the applicant based on a number of deciding factors.

If you need help to draw a will or if you think you have a claim on a will, please contact us. There are tight time frames in which to exercise your rights and we offer a free, 10-minute phone consultation.