The Statutory Will Solution to Incapacity. Re MTX 2020 QSC 117 and the court application that could save your estate money 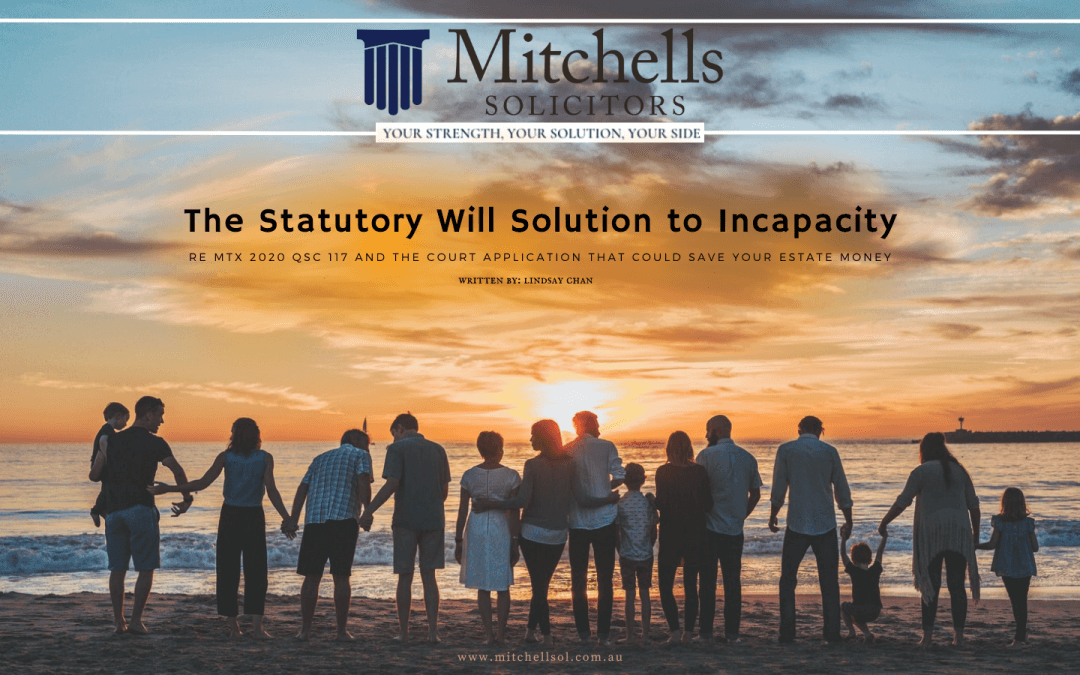 The Statutory Will Solution to Incapacity

Any will professional worth their salt will tell you to avoid a court application if you can. Allowing a Judge to make a decision on an estate can take a toll on both the health of the parties as well as the financial health of the estate and can easily be avoided by proper planning.

But there’s some things that you just can’t plan for. A spouse who suddenly becomes mentally incapacitated can wreak havoc on estate planning and an application to the courts for a statutory will can suddenly become a much more attractive option, with the costs saved far outweighing the costs of the application.

In MTX 2020 QSC 117, a husband and wife had been married for 68 years and had four surviving children. Their shared assets consisted of:

The MTX family took their legacy seriously and sought legal advice about their wills consistently with their legal advisers making corresponding wills in 1997, 2001, 2004, 2007 and 2008.

In 2015 the matriarch of the family was diagnosed with dementia by her GP and her husband became her attorney in 2016 as well as her main carer. In 2019 the husband received specific tax planning advice from KPMG which advised him to make amendments to his will in order to make substantial savings, which he did. Unfortunately, the changes to his will now unintentionally affected his wife’s will so that the gift to their children was unfair.

The wife no longer had capacity to change her will and her geriatrician confirmed that she would never gain capacity at any time in the future. The tax advice had benefited the estate but not the children who the parents were so keen to financially protect.

(a) a will to be made or altered, in the terms stated by the court, on behalf of a person without testamentary capacity; or

(b) a will or part of a will to be revoked on behalf of a person without testamentary capacity.

The court may make the order only if —

(a) the person in relation to whom the order is sought lacks testamentary capacity; and

(b) the person is alive when the order is made; and

(c) the court has approved the proposed will, alteration or revocation…

In order for the court to make their decision, there had to be the following:

Satisfactory evidence of lack testamentary capacity — which was provided in this case by the wife’s geriatrician who had been treating her for a number of years.

There needs to be evidence of the person’s wishes, and there has to be evidence provided in relation to the terms of any will previously made by the person- the husband was able to give evidence that discussions between him and his wife in relation to estate planning were always aimed at ensuring their family’s legacy was protected and maintained for the benefit of the children and grandchildren.

There is also the requirement that there should be evidence available in relation to whether there was a gift to a charitable or other purpose that would be reasonably expected to be made by the person — although the husband had made provision for charity in his will, his wife never had any specific provision for charities under her will. The persons directly affected by the will are the four children only and they supported the application and anyone who might benefit under the intestacy rules had been considered.

The Judge was satisfied that all conditions were met and the application was granted. No losers, only winners in this case and no word of advice of how adequate planning could have avoided the costs of the application on the estate.

There is a word of warning about asking the court to make a statutory will with less than honourable intentions. In the MTX family, every decision made around the interests of their children only. If the purpose of the arrangements had been to defeat any potential creditor, then the decision of the court would have been different.

We can always do our best to plan for the future but for those times when we can’t then the provision of a statutory will can help you protect your legacy when your spouse can’t.