TWO WILLS TOO MANY RE: Perry 2021 QSC97. How to deal with overseas assets the right way. 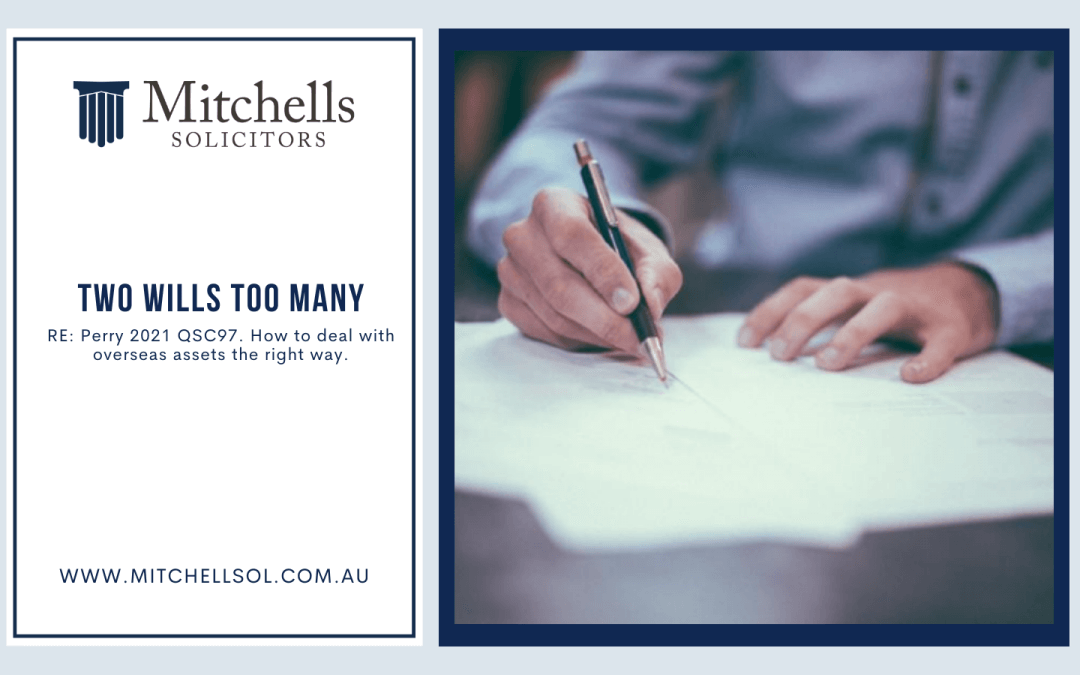 TWO WILLS TOO MANY

Overseas assets. They can cost you a lot less to secure, provide you with a lot more profit but unfortunately can give you a headache when it comes to considering how you’re going to include them in your estate plan.

If you have assets in different countries and have taken any kind of advice then you’ll already know that the best way to handle overseas assets is to make a separate Will in each country, because by ensuring that each country’s assets are dealt with independently there’s no danger of complications for your executors by having to establish which country’s laws applies nor is there any danger of all your assets being held up because if there’s a problem or dispute with one Will ,that won’t affect the other assets in the other Wills.

It’s a simple solution, except there are still problems with overseas assets on death and not because the assets are overseas but because the owner of those assets has forgotten one important thing ; to share information about those other Wills with the estate planners in the other countries, and that one mistake can have massive consequences.

In Re: Perry 2021 QSC97, Michael Perry made three separate Wills between 2018- 2019 to deal with his assets in Australia, Thailand the United Kingdom.

His first will made on the 13th September 2018 was made in Thailand and dealt only with his assets in that country. In this Will Michael gifted a Thai property to his daughter, Chayanud Perry, and the residue of his estate to his partner, Pathichaya Yotchutuukan who already owned another property in Thailand which Michael had already purchased for her.

On the 21st September Michael used the same legal professional to prepare a Will dealing with his assets in the United Kingdom. In this Will Michael’s disabled brother, Barry ,was given a life interest in the Perry family home with the remainder to fall into the residue on his death. Michael’s UK bank account was also assigned to be held on trust for Barry with the residue again falling into the residuary estate on his death which would then be shared equally with Michael’s other siblings that survived Barry.

Finally, on the 10th October 2019 Barry sought estate advice in Australia and made a final Will leaving his residuary estate to his partner Pathichaya and his daughter Chayand. This Will, as in the Wills before, only dealt with the assets in Australia and not the other countries.

Even though Michael followed advice and made different Wills for each country in which he held assets, when he died he left executors with a big problem, and it all came down to one extremely standard clause in his Australian Will:

“I hereby revoke all former wills and testamentary dispositions previously made by me and declare this to be my last will and testament.”

This meant that the Australian Will had just cancelled out the two earlier wills. As Pathichaya and Chayand were the beneficiaries in the Australia will, they weren’t affected to the extent that Barry Perry would be and he would now not receive anything from his brothers Will.

(a) a clerical error was made; or

(b) the will does not give effect to the testator’s instructions.”

There was clearly no clerical error and so the court considered witness evidence including Michael’s legal advisors. The author of the Australia Will testified that they were unaware of the other assets and the other Wills as Michael hadn’t shared this information with them and therefore the Australia Will didn’t give effect to Michael’s instructions.

The court agreed and ordered that the Australia Will should be rectified by adding to clause 1 after the words “previously made by me” the words “except for my wills of 13 September 2018 and 21 September 2018”.

It transpired during the hearing that Michael had made a will in Australia in 2015 and he might have thought that in signing the new Will he thought only the earlier Australian Will would be revoked and not the Wills in the other countries. If only Michael had told his legal advisors about his overseas assets and the Wills that were held there, he would have received the correct advice about the consequences of a revocation clause and the clause would have been amended before it was executed.

If you have overseas assets then there’s an easy way to deal with your estate, but it’s only easy if you share information about those assets with your legal advisor in each of the countries you have a Will. Michael Perry’s two wills weren’t too many but the information he shared wasn’t enough.