When Santa Got Stuck Up The Chimney a Power of Attorney Saved the Day. 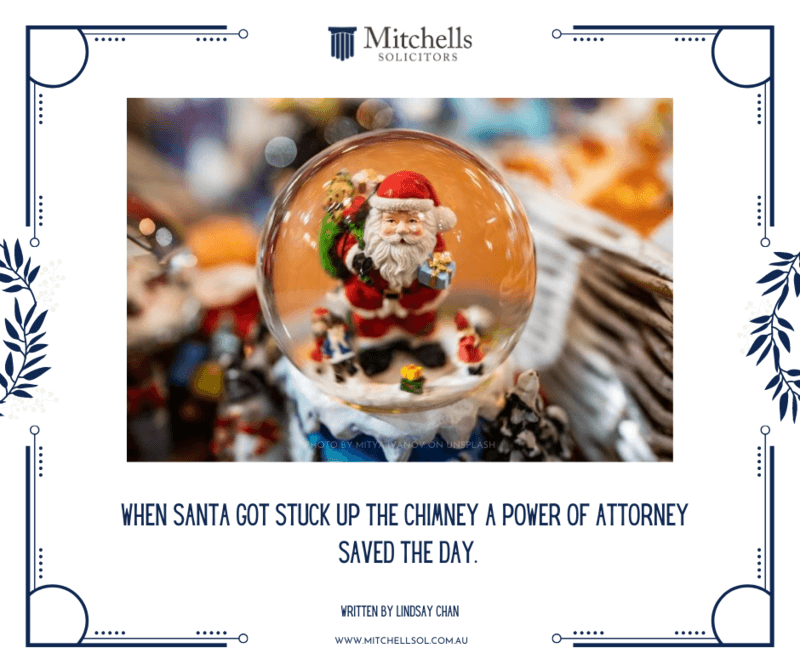 Do you remember the year when Santa got stuck up the chimney? We’ve all read the reports of that fateful night after Santa had eaten too many mince pies and got stuck in a precariously uncomfortable and dangerous position with Rudolf. His beard was all black, there was soot was in his sack and Rudolf’s nose turned blue. If they hadn’t been rescued then Christmas would have been cancelled and boys and girls throughout the world would have had no presents under the tree.

The real hero of this story though is Mrs Clause and an enduring power of attorney.

Santa wouldn’t be the man that he is without preparing for every eventuality and on the 7th December every year he checks that all his affairs are in order including an enduring power of attorney, which allows Mrs Clause to make decisions on his behalf regarding their finances and business matters (and even certain personal matters upon Santa losing capacity). Thanks to Santa Clause’s organisation skills, on the night that Christmas very nearly got cancelled, Mrs Clause was able to use her power of attorney to access Santa’s bank account, authorise the heat seeking hydraulic crane and sign the authorisation papers on Santa’s medical procedure to reset his nose (while he was in a soot induced coma).

And because Mrs Clause always encourages Santa to take a belt and braces approach,(especially when it comes to his suit on Christmas Eve) the Clauses chose an enduring power of attorney, taking independent legal advice and then making sure it was signed and witnessed. An enduring power of attorney continues to be valid even if Santa were to lose capacity and be able to make his own decisions. A wise choice as Santa is,after all, 1,750 years old.

A power of attorney isn’t just for Christmas either. If you’re out of the country, having a medical procedure or just in case you might get stuck somewhere when you least expect it, an enduring power of attorney can be entered into at any time as long as you still have capacity to make decisions and can cover as little or as much as you decide:

With great power comes great responsibility. Santa knew that the only person he could trust with the responsibility of Christmas was Mrs Clause and if you’re thinking of putting a power of attorney in place then you too need someone you trust to handle your affairs.

The law requires that each attorney must act honestly and apply reasonable diligence to protect your interests along with the following obligations:

However, In the 2017 report titled Elder Abuse-a national legal response the Australian Law Reform commission stated that there is evidence to suggest that financial abuse is the most common form of elder abuse and that, in a significant minority of cases, the financial abuse is facilitated through misuse of a power of attorney by the person closest to them, so choose carefully.

EH is permanently on Santa’s naughty list (VMH [2018] QCAR 14) after she was named as her mother’s attorney in 2011 with the power for financial matter to begin when her mother lost capacity as certified by a medical practitioner. EH then spent her mother’s $128,923.23, sold her property leaving $130,000 unaccounted for, and unpaid nursing home fees.

It’s always beneficial to have an  independent party in your corner and a wills and trust specialist can be relied upon to notice any mismanagement and provide evidence to the Public Guardian asking them to investigate the matter. They can also prepare the forms and advise you on all aspects of your decisions about how much authority you want to give away and when you want that authority to be available. Downloadable documents over the internet may seem simple but they might not offer the cover you require.

So this Christmas, be a bit more Santa and Mrs Clause. Put a power of attorney in place as part of your estate planning for those times in life when you’re stuck (or simply upon the event of losing capacity) and then relax in the knowledge that someone you trust is handling your affairs. Mitchells Solicitors will be happy to help!