When Should You Write a Will? 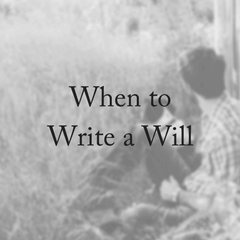 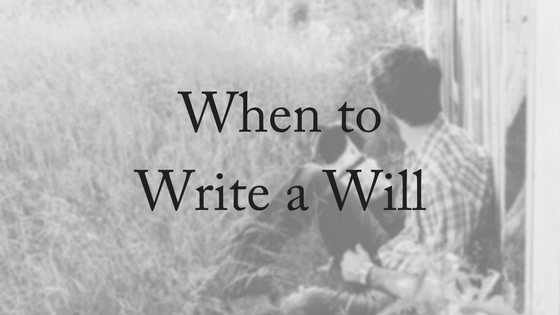 Imelda Dodds, the CEO of the NSW Trustee and Guardian often hears: “I have nothing worth leaving to friends and loved ones, so there’s no point in writing a will.”  According to their research, it is young people who have the largest percentage of those people without a will, often due to the belief that they won’t die anytime soon, and if they did, they own nothing anyway.  Dodd believes that we should all put our wishes in writing as early as 18 years of age. If you are over 18, it’s time to write a will!

According to the Australian Securities and Investments Commission, half of all Australians will die without a will. The Australian Bureau of Statistics estimates that the Australian population sits at about 24,232,231 people (as at 4 October 2016).  The population clock takes into account several factors, including the current rates of 1 birth every 1 minute and 44 seconds and 1 death every 3 minutes and 20 seconds.  That means that on the 4th of October this year, about 12,116,115 people do not have wills in our country. That’s a lot of confusion and chaos to leave behind to your loved ones.

[Tweet “At the moment, half of all Australians will die without a will.”] 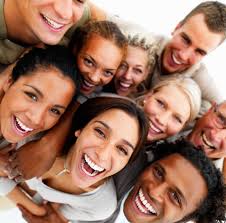 “Our research tells us that the vast majority of people who say they don’t wish to make a will, the reasons are they believe that they have nothing to leave largely because they think that they haven’t got real estate,” says Ms Dodd. “That’s actually not true, they do have things to leave and there are important things that can be provided for in a will. Quite often young people may have some small nest egg, [and] they may have seen experiences of others where wills weren’t made.”

Personal items of value are often undervalued and dismissed as being of little importance either monetarily or sentimentally. Dodd says, “You forget that things like jewellery [are] a really important thing. There are small items, there are larger items that have got great emotional value that people overlook. They’re important things that can be considered in a will and should be considered.”

Even young people will have started to accumulate superannuation, and often there is a life insurance policy within a super fund. All of a sudden, you may have an asset worth tens of thousands of dollars – or more.

It’s also important to realise that a will directs your loved ones with regard to funeral arrangements, burial or cremation arrangements, and the power to administer your estate. This involves paying out debts, closing bank accounts, and distributing any assets. When you write a will, it really isn’t just about what you own.

What happens if you die without a will?

Dodds encourages people to “think about in your lifetime, how many relationships you might have had with a significant person that you would consider would equate to a de facto relationship or indeed a marriage, because if you die without a will, then all of those people may have a claim on your estate.” Dying without a will means you are considered to have died intestate. If you die intestate then your estate is divided up according to a legal process which may or may not be how you would have chosen for your estate to be divided up. The law in Queensland defines someone as intestate if they either die without a valid will, or they have a will but it does not include all of their estate in it. The rules of intestacy mean that your estate will be distributed in this order:

It just might be that at our time of death that these may not be the people whom we wish our estate to be left to.  And certainly if there is no will then you cannot dictate what percentage should go to whom.

When should you write a will?

If you haven’t already written a will and you are over 18, then the time is now.  Nobody really wants to talk about their own death, but we are confronted with our own mortality when we hear about the death of others – particularly if they die young. According to the Australian Institute of Health and Welfare, in 2012 there were 49,692 premature deaths in Australia (that is deaths among people younger than 75). There were 1,203 deaths of young people aged 15-24 years of age. There were 5,112 deaths of people aged 25-44. The death of most of these people was unexpected. We do not know when death will come to us or when it will affect our families and loved ones.

When you turn 18 you can write a will. In Queensland you must be at least 18 years of age to make a valid will.  Even if you think you don’t have any valuable assets, dividing up your ‘precious 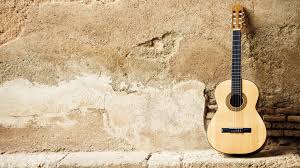 things’ (a favourite book, your musical instrument or your signed cricket bat) can be of amazing worth to your family and friends when they are grieving.

There are some other significant times to think about writing a will (and then actually getting on with it):

When you have written your will it’s a good idea to not just revise it at these significant life events, but to review it at least every 5 years.  This is the recommended length between revisions by many estate lawyers in Australia.

If you would like to write your will or revise your current will, then we would love to help.  Contact us for a free, 10-minute phone consultation.  Please contact us today!