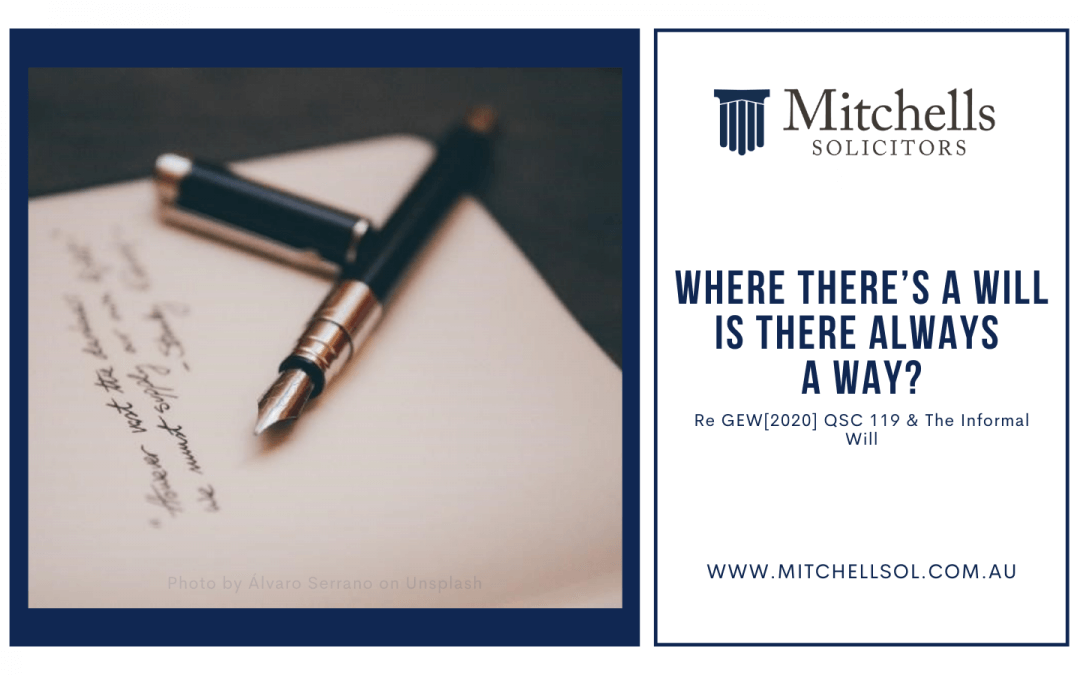 Where There’s A Will Is There Always A Way?

Letters, emails and, more recently, even text phone messages, have been held by the courts to be a valid will. But before you pull your phone out and start announcing your beneficiaries on social media, it’s worth remembering that not all informal wills are treated equally by the courts and there is a three limbed test that needs to be satisfied before an informal will can be admitted to probate.

The Applicant in Re: Gew was the eldest child of the deceased and worked as a Legal Practitioner. Her father had recently separated from his second wife and had discussed the legal implications of his divorce with his daughter along with his intention of updating his will. His second wife was named as the sole beneficiary and executor of his current will which was made in 2001 and he no longer wanted her to benefit. During those discussions, with both his daughters, the deceased made it clear that he wanted his eldest daughter to be the executor of his estate and that his three children would be the only beneficiaries. The deceased made an appointment for his daughter to attend the family solicitors with him on the 5th July 2019 to update his will but sadly never attended the appointment.

On the 3rd July the Applicant became worried as her father wasn’t returning her texts or calls. She asked the police to undertake a routine check and her father was found dead having taken his own life. Next to her father’s body was a note addressed to her, along with a number of folders containing documents relating to bank accounts, and other accounts as well as amounts in cash. The suicide note was not signed or witnessed but was in the deceased’s handwriting, and had been placed in an envelope addressed to the Applicant which was dated the 1st July 2019.

The Applicant therefore asked the court to admit her father’s handwritten note to probate under S18 of the Succession Act 1981 (Qld)  instead of the earlier, properly executed, will which left everything to her father’s estranged wife.

Under Sec 18 the court will consider three things in making their decision as to whether or not an informal will can be admitted:

The suicide note was clearly a document which although hadn’t been executed properly did include the testamentary intentions of the deceased. The document appointed the Applicant as an executor, left specific instructions about the distribution of his estate and although the document itself wasn’t dated, the envelope it was placed in was. But was it really the deceased’s expectation that this document should operate as his will?

The deceased’s estranged second wife didn’t think so. She argued that there wasn’t any evidence in relation to the deceased’s capacity at the time the suicide note was written. She argued that he was depressed and drinking at the time the note was written and therefore lacked capacity. However, when examining the suicide note the court observed that the handwriting was legible, not erratic in anyway, and contained clear instructions to his daughter in order that she could fulfil his wishes as per their earlier discussions.

The court was satisfied that all three limbs of the test under Sec 18 had been satisfied and probate was granted for the informal will with both the Applicant’s and Respondent’s costs being paid out of the estate.

If the deceased had attended his appointment with his family solicitors on the 5th July a proper will would have been drafted which would have avoided both the need for court intervention and the hefty legal fees which reduced each of the beneficiaries’ share considerably.

Although there’s no guarantee that a will won’t be contested in court, a properly drafted will reduces that risk considerably. Don’t leave it up to chance.  Take advice from a solicitor who specialises in wills and estates and make sure your will is properly updated and executed.