Where’s Your Will? The Will of Valerie Eve Robson [2020 QSC 52] and the Forgetful Will Custodian. 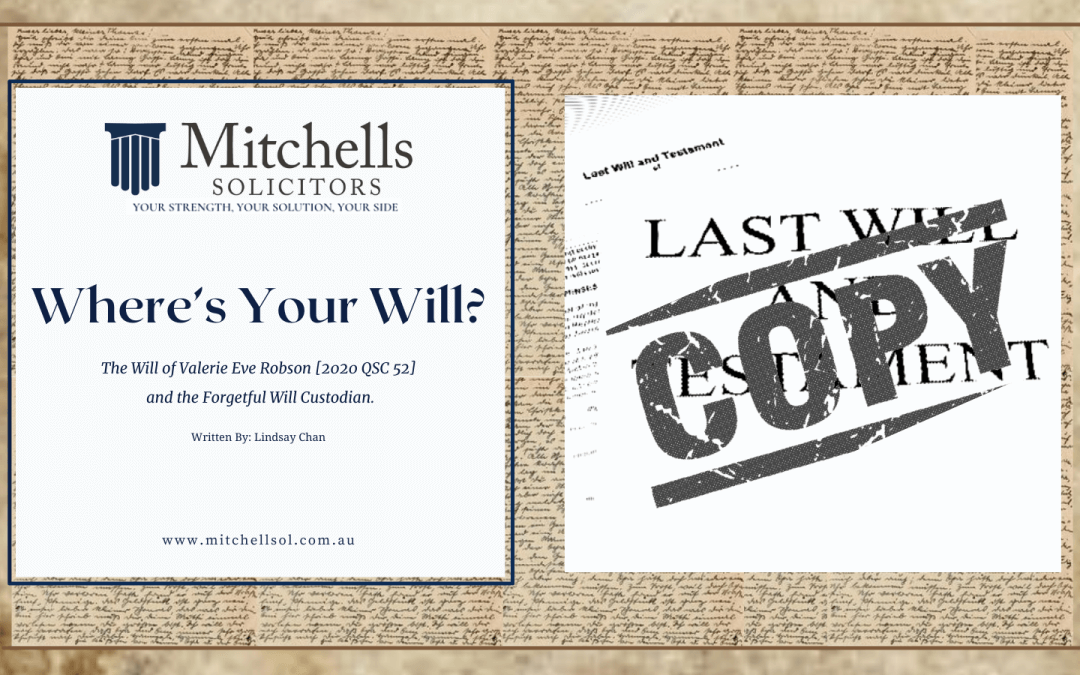 The Will of Valerie Eve Robson [2020 QSC 52] and the Forgetful Will Custodian.

Where’s your original will? The original one, not the email or photocopy that you received from your legal advisors but the actual document that you signed in the presence of two witnesses? If you’re struggling to remember exactly where it is and who’s looking after it, then the case of Valerie Robinson is going to save your estate money and your beneficiaries a headache.

Valerie Robinson made her will with her solicitors in December 2004 which was signed and witnessed and in which she had named her step sister Ann as the executor. A true organiser, she sent Ann a photocopy of the will and handwrote a note on saying:

“ Annie- copy of my will. Any questions-just ask Val.”

Six years later, in 2010 Valerie was diagnosed with dementia and as her condition deteriorated, her brother Gordon was appointed her guardian to make decisions in relation to her care. On hearing about Valerie’s deteriorating health in 2013, the original solicitors contacted Ann suggesting that someone should collect Valerie’s will and Gordon collected the will and other financial documents of Valerie’s from them.

Ann was unable to get a grant of probate without the original will and so an application was made for the court to decide whether the photocopied will could be admitted to probate.

It was clear from the photocopy that the document was a will which clearly stated that all previous wills were revoked and that the will had been signed and witnessed correctly. What wasn’t clear was what had happened to the original will as there is always a presumption that if an original can’t be found then it must have been destroyed, thus revoking it.

Had Valerie sneaked into Gordon’s office and destroyed the original will because she no longer relied upon it as her last will?

Highly unlikely given Valerie’s health, and Gordon was able to provide evidence that Valerie hadn’t visited his home in the time period between him collecting the original will and the date of her death.

The court concluded that this evidence was enough to overcome the presumption that Valerie had destroyed the will, and along with medical evidence which showed that she had mental capacity at the time the will was written, were able to allow the photocopied will to be submitted to probate.

But at what cost? Gordon’s failure to locate the original had cost the beneficiaries of the estate dearly as the costs of the application, which could have been avoided if the original had been found, came from Valerie’s estate.

Everybody knows that an original is worth far more than a copy. That print you’ve got hanging in your hall, as attractive as it is, isn’t going to be as valuable as the original hanging in the gallery of modern art. The same applies with the storage of your will. You won’t be expected to keep it framed alongside a certificate of authenticity but relying on a copy is a sure fire way to reduce your estate. So treat your will like you’d treat that masterpiece and make sure you, and those your trust to administer your estate know exactly where it is.