WHO SOLD MY INHERITANCE? Outram v Public Trustee of Queensland [2020] QSC 80. How it can happen and what you can do to make sure you’re compensated for your loss 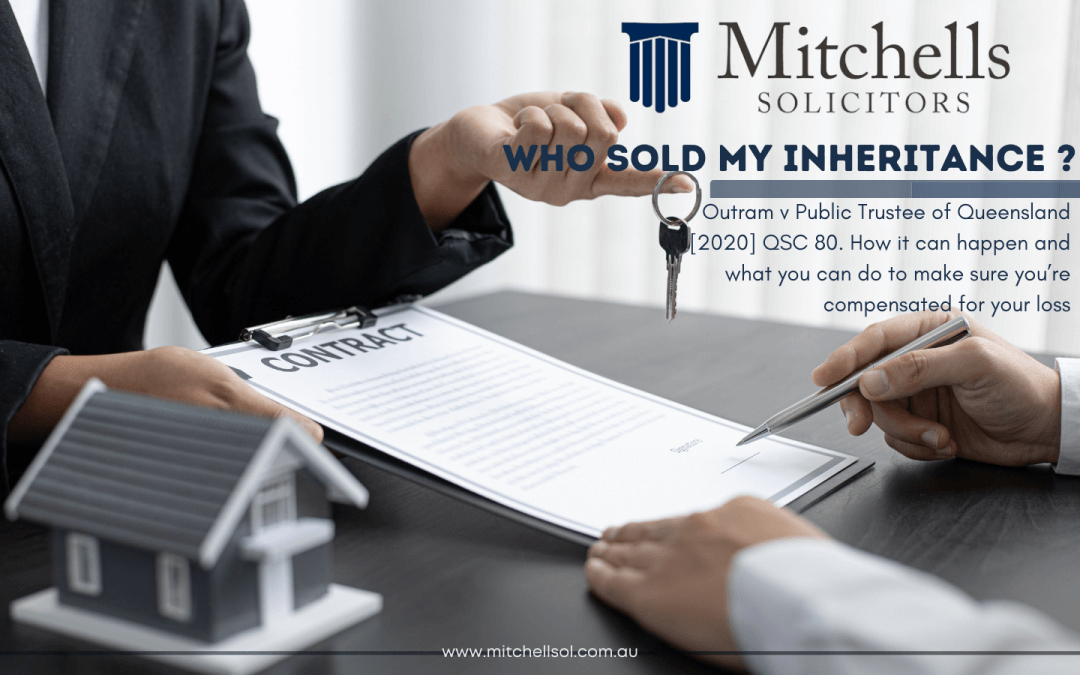 WHO SOLD MY INHERITANCE?

Outram v Public Trustee of Queensland [2020] QSC 80. How it can happen and what you can do to make sure you’re compensated for your loss

There are a number of different will makers, when it comes to leaving gifts to beneficiaries in their wills. Firstly there’s the will changers. This group of people are aware that wills are flexible and of their right to add to or delete beneficiaries, with January being the most popular time for those changes to be made. Christmas with the family can soon lose its tinsel coloured glow once the New Year is reached and the relative, who spoke out of turn, can quite easily find themselves without the family heirloom they’d been promised for years, and out of the will completely.

Then, at the other of the spectrum, are the will endurers. These people tend to make one will, and one will only in their lifetime and won’t seek to change that will. Gifts made by will endurers are usually honoured, so no worry from beneficiaries about being removed from the will following a family argument. But the gifts made can also be lost or sold as the years go by and, without the will endurer updating their financial position and providing a substitute gift, then the original gift will fail, leaving the beneficiary without.

Thankfully the courts have devised solutions for both the will changers and the will endurers. A Family Provision Application (in Queensland this would be in pursuance of Part 4 of the Succession Act 1981) allows certain family members to ask the court for a share of the estate despite, not being included in the will, subject to various conditions and an experienced trusts and estates solicitor will always advise for substitution gifts to be included in the will, minimising the chances of a will endurers’ beneficiary being left with nothing.

But, what happens if the will maker doesn’t sell their gift, someone else does? What legal recourse is there then?

Enter the will deciders.

These people are appointed by the will maker to make decisions on their behalf should the will maker become mentally capacitated through an enduring power of attorney and as in the case of the Outram v Public Trustee of Queensland [2020] QSC 80, can sell your gift to provide for the will maker and you could be completely unaware of it.

Heather Everingham married a widower and had three stepchildren. When the children’s father died, Heather was the only beneficiary and although there was only a small estate worth around $662k, she left her property, Blackwood Road, equally between her three stepchildren with the residue left to her niece and two nephews.

By 2015 Heather was living with her nephew, Peter, and his wife. Her mental and physical health had deteriorated to the point where she was no longer able to care or make financial decisions for herself and Peter was appointed under an EPA to be her attorney. It was decided that Heather would sell the Blackwood Road property and the proceeds would pay for her bond at a retirement village. Peter wasn’t aware that the property had been left to Heather’s step children in her will but had consulted with the step children before the decision was made to sell the property and had initially made enquiries with them to see if any of them wished to purchase the property.

The property was sold for $570k and Heather entered the retirement home with the surplus cash from the sale being paid into her estate. It was only on her death in 2018 that the discovery was made that the Blackwood Road property should have passed to the step children under the will. Instead, the money from the sale had now bypassed the stepchildren completely, leaving them with nothing and going straight to Heather’s nieces and nephews instead.

There was no suggestion that Peter had acted dishonestly in selling the property. He was able to evidence emails between himself and the stepchildren discussing the sale of the property but unfortunately neither him, nor the other family members, were aware that they had been left the property and not part of the residue and would be left with nothing as a consequence of the sale.

Section 107 of the Powers of Attorney Act 1998 provided a solution. The Act allows the court to order appropriate compensation to be paid from the estate to disappointed beneficiaries. But how much money would be appropriate?

Previous case law had provided guidance and the court would look at:

Unlike a Family Provision claim, compensation under Section 107 is based on the loss of benefit under the will and not need. There had been no improper conduct, the only other beneficiaries were the nieces and nephews and the sale proceeds had been used to fund the retirement village with the surplus being paid back into the estate.

The stepchildren sought compensation effectively to the value of the entire estate. Their claim pitched the “starting point” at $705k: the sale price achieved for the Blackwood Road property by the new owners at the time its re-sale shortly prior to Heather’s death.

Her honour rejected that contention and held instead that — in the circumstances of this particular case — the “best evidence of the lost benefit” was the net sale proceeds achieved by the attorney in 2016 ie $552k. The judge was also able to award costs from the residue of the estate so that the compensation to the step children weren’t diminished by the costs of the application.

All’s well that ends well you may think, but the application itself has reduced the money payable to the niece and nephews, who were gifted the residue of the estate by Heather. The real solution to a failed gift is to avoid it occurring altogether. If the step children had been included in the residue, the application could have been avoided.

Whether you’re a will changer or a will endurer the best way to protect your beneficiaries is to seek out advice from a specialist solicitor in wills and estates.