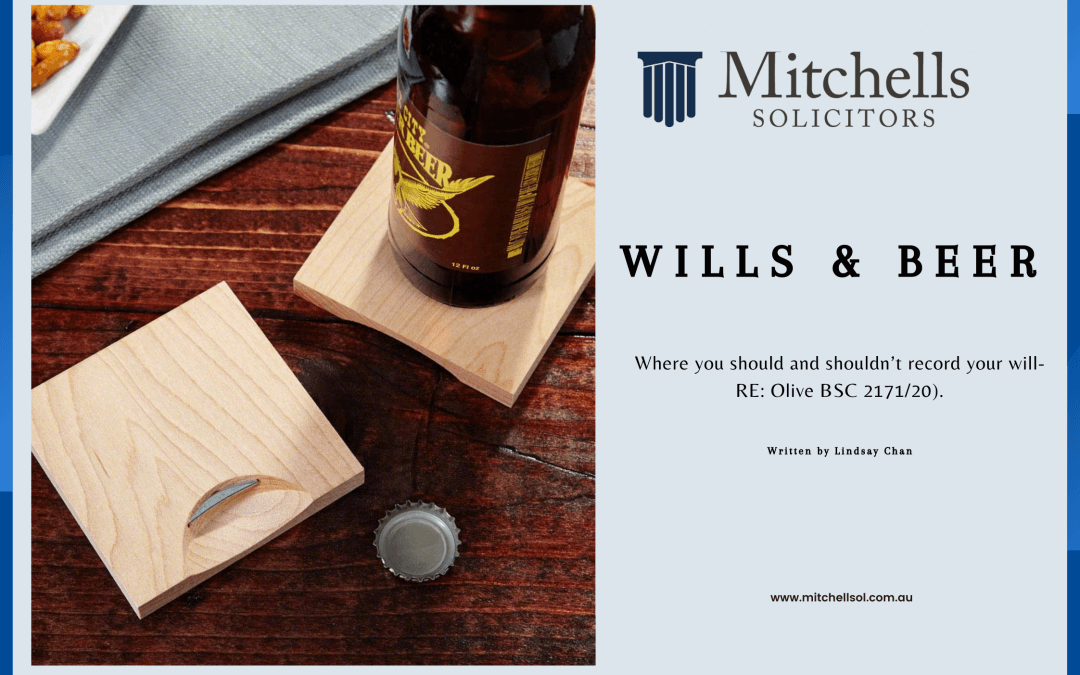 Many a brilliant business idea has been written on the back of a beer coaster, just ask Richard Branson who said “The best ideas don’t always need to have detailed financial projections and complicated business proposals behind them. Sometimes they come fully formed on the back of a beer mat. One such idea was the spark that led to the fastest growing Virgin company of all time: Virgin Blue.”

It can be great for business to brain dump its ideas on whatever comes to hand when inspiration strikes,  but when it comes to figuring out how your estate should be distributed then a recent Queensland case has confirmed that beer and its packaging should have no place.

Bruce Olive had written a formal will in May 2019, which divided his estate between two of his children, three stepchildren, and two grandchildren, along with a gift to his friend of $20,0000. But, then Bruce had a change of heart and told his friends he was going to write a new will which would distribute all his estate to his friends, leaving his family out.

But rather than go back to his legal advisor and ask for his will to be formally changed, Bruce took matters into his own hands. Why wait until the morning when inspiration had struck now? In the presence of his friend and executor of his will Bruce wrote down his thoughts on whatever he could lay his hands on, writing names and amounts on a piece of cardboard from inside a beer carton, as well as a coaster with ticks and crosses against the names with notes such as ‘he doesn’t deserve it’ or ‘has enough’ next to the family members he wanted to disinherit. Having finalised his plans he left the notes on his pool table and bade good night to his friend.

In the following days, Bruce realised that he needed some professional advice and made an appointment to amend his will however, before the appointment took place, he died suddenly aged 69 leaving $1 million dollars in his estate and an executor who was intent on fulfilling her friend’s wishes and wanted the court to rely on the wishes contained on the coaster.

Because Bruce had made an appointment to amend his will, the court found that he didn’t intend to be bound by the document without doing anything more and probate was granted on the May 2019 will, favouring Bruce’s family rather than his friends.

Relying on the courts to dispense with the formal requirements of a will is risky and there are just as many unsuccessful claims as there are successful ones.

By all means, write your business ideas and to do lists on your beer coasters, but when it comes to will writing, the only place to record your wishes is formally, with a solicitor who specialises in wills and estates.