Dementia, signing a will, and elder abuse 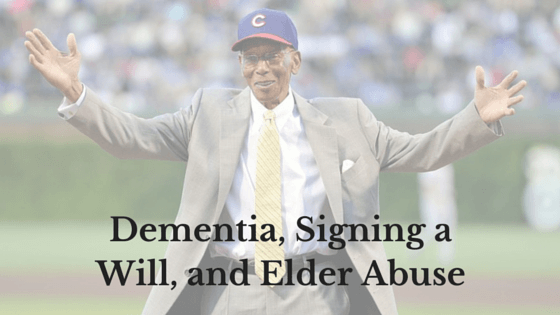 Baseball legend Ernie Banks died at the age of 83 in January, prompting an estate battle between his estranged wife and his caretaker.

Elizabeth Banks has formally contested her husband’s will, which was allegedly signed the previous year, after a dementia diagnosis, leaving his entire estate to his caretaker, Regina Rice. Elizabeth and Ernie were estranged at the time of his death, but not divorced.

Elizabeth claims that Ernie had been diagnosed with moderate to severe dementia only days before he signed his new will. She also alleges that Rice isolated and controlled Ernie, including changing his phone numbers so that family members couldn’t contact him.

[Tweet “Ernie Banks’s wife alleges that his caregiver influenced him into changing his will.”]

Rice contends that Ernie trusted her with his affairs and had told her that he wished that his estranged wife get nothing in his will. On October 14, Rice took Ernie to visit a neuropsychologist at the University of Illinois Medical Center, whose evaluation “specified that Ernie exhibited significant cognitive impairment that indicated a presence of dementia of moderate to severe degree,” the filing stated.

Within days of the diagnosis, Rice contacted an estate planning lawyer — whom Banks did not know — and arranged for a new will and trust to be drafted, according to the filing. The new will left the entire estate to Rice, cutting out his wife and children “not for a lack of love and affection for them and for reasons best known by them.”

Rice was also given the lucrative rights to Ernie’s name and likeness.

[Tweet “Banks’s new will cut out his children and wife, giving everything to his caregiver.”]

Ernie’s previous will, drafted in 2008, left his estate to his wife and children and asked that his cremated remains be scattered on the baseball field he’d played his career on. The 2014 will was markedly different.

Dementia doesn’t disqualify someone from signing a will

Dementia doesn’t always mean that a person lacks the necessary capacity to write a will. The degree of illness and how it has affected their cognitive function means that this type of dispute will have to be made on a case by case basis. A specialist in this area of the law will take detailed notes and conduct their own investigation into the health of the person during the interview.

However, we do know that the presence of dementia increases a person’s vulnerability to elder abuse.

Spotting elder abuse as it happens

Keeping an older person from seeing or speaking to their family members and isolating them by changing their phone numbers is a red flag for elder abuse. It enables the abuser to hide their activities and make the older person more dependent upon them. This is particularly true in the case of financial abuse, where family members might spot personal belongings and valuables go missing, or strange transactions in bank accounts.

Some of the most common reasons for will disputes include the financial abuse of an older person, the presence of an illness like dementia, and undue influence on the older person to change their will. If you have any concerns in these areas, please contact us today.